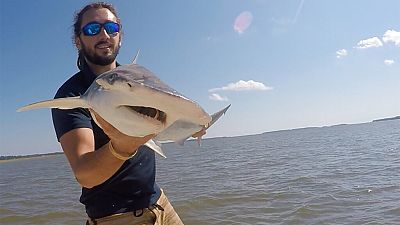 Every year, sharks undertake long migration routes through the dark ocean, often through vast empty gulfs with no physical features to mark their way.

But, how do they know where they’re going? Scientists have been mystified for years - until now.

Researchers00476-0) from Florida State University decided to look at bonnethead sharks, a kind of hammerhead that lives along the American coasts and comes back to the same estuaries every year.

“You have sharks that can travel 20,000 kilometres and end up in the same spot,” says Bryan Keller, a researcher on the team.

Using 20 sharks, the scientists exposed the bonnetheads to magnetic fields that simulated locations hundreds of kilometres from where they were. When the synthetic fields prompted sharks to think they were south of where they actually were, they began to swim north as if prompted by GPS.

Tracking their subjects by satellite, biologists learn when sharks migrate, where they go, and how they use magnetic clues on the ocean floor for navigation.

Further research is needed to find out exactly how the sharks use these magnetic fields to determine their location and to see if larger sharks behave in the same way.

The scientists on the team believe they will. According to Keller, it’s very unlikely that bonnetheads evolved to respond to magnetic fields and other sharks, some of which make cross-ocean journeys, didn’t.

Keller went on to say that their discovery will help the conservation of our toothy friends.

“The last 50 years have been pretty devastating for global shark populations,” said co-author of the study Nathan Pacoureau.

Global fishing rates have doubled since 1950 and many sharks get caught up in nets. Others are hunted intentionally.

Because sharks reproduce at a rate more similar to mammals than fish, global populations can’t keep up.