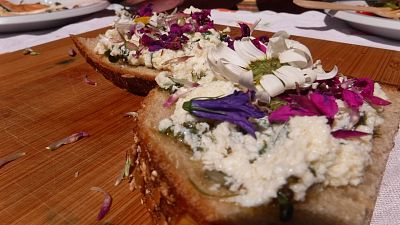 In the past few years, foraging for food has made a comeback. The practice of hand-picking plants to eat is attracting notoriety, with chefs Doug McMaster from Silo London and Darina Allen from Ireland raising its profile.

Most things are available to us by simply picking up the phone. Figures released by Statista in December 2020 revealed that the foodservice delivery market was worth a staggering €9.8 billion. So, with orders being such an important part of our lives why is foraging a hot topic among people concerned with sustainability and the health-conscious?

There are benefits to foraging for food in today’s world. It’s free, it gets us moving and it can improve wellbeing. Research by Natural England during the July 2020 lockdown found that 85 per cent of adults said that being in nature made them happy.

The pandemic highlighted the importance of being outdoors to people’s mental and physical health, and the NHS has started to expand social prescribing throughout the UK. This enabled GPs and healthcare practitioners to refer people for nature-based activities, such as walking, gardening, growing food, and simply being outside in the fresh air.

In simple terms, foraging is about searching for herbs, plants, fruit, nuts, and fungi in the wild, gathering, cooking and eating healthy and nutritious food.

Foraging isn’t new. It originates back to the start of humanity when hunter-gatherers sustained themselves by collecting wild plants and hunting animals. On a trip to Borneo a couple of years ago, I met people that lived totally off the land and even made alcohol from plants.

Here in the West, we moved towards farming and agricultural methods 12,000 years ago, and over time our ancestors started to forget how to gather wild food from the land.

On a trip to Verbier in Switzerland last summer, I decided to find out more and met with a mountain guide, qualified Swiss American botanist, and international mountain leader (IML), Cherries.

Over a WhatsApp call with Cherries a week before flying to Switzerland I discovered that becoming an IML is no easy task. She trained in all four seasons over four years in the Val d'Anniviers on the northern slopes of the Pennine Alps.

Cherries studied flora, fauna, glaciology, geology, hydrology, she can build igloos and has medical mountain security and orienteering experience. Combined with over 10 years as a mountain guide, I ended the call feeling like I was being delivered into safe hands.

Cherries met me and other members of the group outside the Hotel Bristol Verbier and whisked us away in a cable car to La Tzoumaz on the other side of the mountain. On our way through the clouds, she explained that we were going to forage for weeds, plants, and flowers in woodlands and meadows on a morning trek to La Maison de la Forêt, a Swiss chalet high above the valley, to prepare for a picnic.

It quickly became evident that Cherries was passionate about the mountains and everything that lives and grows on them. We were captivated as she told us stories about every plant we picked and placed into our eco-friendly foraging bags. Some of the plants we were familiar with such as dandelions, field pansies, harebells, nettles, wild rhubarb, and spinach.

“So, this is called hogweed, we call it the ginseng of the Alps. It is often referred to as the King of all herbs and improves general well-being,” she told us.

“And these are yarrow leaves, which are known for their ability to stop bleeding.”

Unfortunately, she also told us that dock leaves don’t relieve the sting from nettles, and in some cases, make it worse. No matter how hard I tried to copy the way Cherries picked nettles I still managed to get stung.

With our bags filled with fresh alpine herbs and flowers, Cherries took us to meet a local cheesemaker to get some Sérac. Sérac is a low-fat Alpine curd made from the whey left behind from the Raclette cheese-making process. It would have been poured straight down the drain not so long ago, but like so many other things that we may not have eaten before, it is now fashionable.

Let’s munch a bunch of weeds

Twenty minutes later we arrived at La Maison de la Foret and set up a table outside. Once Cherries had gone through our pickings and removed everything we had collected by error we chopped and pounded nettles into pesto and arranged daisies into salads. We mixed our plants with the sérac, Italian olive oil, couscous, and freshly baked bread, or as Cherries called it, a Jardin sur pain – garden on bread.

Admittedly we were apprehensive when it came to the eating part of the experience. It all looked quite beautiful, but did I really want to eat daisies? Subconscious memories of my mum pulling weeds out of my mouth as a child came flooding back.

I had nothing to fear, everything tasted nice and fresh. Who would have known that daisies taste that good? I happily took seconds before trying to discreetly move on to thirds without coming across as greedy.

As we finished our wild rhubarb sweet Cherries explained, “it isn’t just the food that is super-healthy.

“Walking over the mountains, slowing down, paying attention to nature, and inhaling the mountain air are also super healthy activities. The British have been coming to La Tzoumaz since the 1860s for fresh air.”

It left me with one final critical issue – why have I only just discovered this amazing part of Switzerland?

Euronews debates how Europe and China should preserve biodiversity

Scientists battle to save Florida's coral reef from 'mysterious' disease