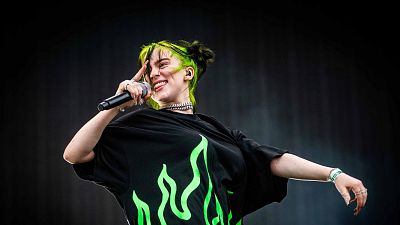 Europe is in the process of welcoming the return of live music with open arms.

Millions of people are making plans to attend their first live concerts and festivals in over a year. It’s a joyful time to anticipate the rush hearing your favourite artists grace the stage once more.

That being said - the pressure is on for musicians and wider industry figures to lessen the environmental impact that constant touring and merchandising holds.

Artist’s vague and fleeting attempts at getting in on the action for the sake of looking good may have worked five years ago but are less successful up against fans ready to fight climate change.

Some musicians are recognising this shift and the need to take action that creates real changes - here are some of the best examples.

Today, @GretaThunberg and @billieeilish joined the youth climate strike in #LosAngeles with @ycstrikeLA. Protesters marched to the office of @GavinNewsom to demand a stop to new oil drilling. #FridaysForFuture#ClimateStrike#BillieEilish#GretaThurnbergpic.twitter.com/3yks2hyfft

Pop music has found its very own climate queen in Billie Eilish. Her audience is substantial enough to have garnered more followers on Instagram than every country in Europe bar Russia.

Her activism goes way beyond surface-level greenwashing of her predecessors. She appeared with Greta Thunberg on her trip to LA’s Climate Strike and has been a vegan since she was 11.

Every venue on Eilish’s next tour will also boast a ‘Billie Eilish Eco-Village’, an area where fans can learn about climate change.

”We’re actually bringing someone from Reverb, this company that basically specialises in the best and most healthy and green ways to do everything,”

“So there’s no plastic straws allowed, the fans are going to bring their own water bottles, there’s going to be recycle cans everywhere, because it’s like, if something’s recyclable, it doesn’t matter unless there’s a recycle bin.”

The drummer of the critically acclaimed, Mercury Prize-nominated UK rock band Savages took matters into her own hands after finding herself increasingly frustrated with the music industry’s inaction.

Two years ago she launched Music Declares Emergency with zero commercial or political affiliations. Their new campaign, No Music On A Dead Planet, will target the COP26 conference in making sure global governments recognise that they are failing to adequately address the needs of our planet.

The organisation’s roster has 2807 co-signs from music industry figures and counting that express their motivations to control the environmental impact of the music industry.

“It’s on fire now, and we need to fix this. Let’s change our lifestyles, let’s fly less, let’s use less plastic – but ultimately what’s needed is a governmental response.”

Her site offers a wealth of information for musicians wanting to do better by their planet. There’s ethically sourced t-shirts on offer, designed by the likes of Radiohead’s Thom Yorke. A protest-fuelled rework of Joy Division’s iconic album, Unknown Pleasures, appears courtesy of the original artist Peter Saville.

Love them or hate them, the British megaband has put more work in than the majority of their peers in addressing the ill-fated relationship between the music industry and our planet.

The band enlisted Greta Thunberg to write a spoken-word essay that featured in their most recent album’s opening track.

Every live show of the band’s last tour created space for thousands of people to engage in the song and often created some emotional moments for their young climate conscious audience as Thunberg tells them: “We can still fix this”.

A further self-produced summer festival in London’s Finsbury Park, derailed due to the pandemic, was set to be the first ever UK event powered entirely by a sustainably sourced biofuel, Hydrotreated Vegetable Oil (HVO), and solar panels.

They’ve also made the concept of repurposing merchandise look easy. Fans were offered the chance to bring their old band t-shirts to shows and have them screen printed with new branding at no cost.

Though this might not be viable for smaller artists that rely on merch profits, it showed how the excessive production of materials doesn’t always have to play a damaging role in album promotions.

The young jack of all trades has had his fair share of success in acting, music, and fashion. Despite still being only 22, Smith regularly uses his influence to enact change on climate issues.

He has appeared in climate talks for TEDx and Al Gore off the back of his award-winning Water Box initiative, designed to help citizens of Flint, Michigan, who have been living with contaminated water since 2014.

Because of his investment and collaboration with community leaders, people living in Flint have access to numerous mobile water filtration systems. The plan now is to deploy these devices in other communities that need them to ensure equal access to clean water.

It doesn’t end there - his modelling work led him to appearing in Levi jeans’ new climate campaign last month, targeted towards Gen Z-ers who are encouraged to move away from fast fashion, and he is due to open a vegan restaurant in Los Angeles that feeds the homeless.

Art pop performer Anohni has a history of activism of all kinds. Her work covers themes surrounding war, protest, and the threats facing our environment

Most famously, she documents her personal reckoning with the climate crisis in the 2014 song, 4 Degrees.

It goes without saying that our collective consciousness of the climate emergency has escalated greatly since then, and so has the singer’s passion for speaking up when it matters most.

Take NFTs for example. A complex issue facing musicians and artists, and many are still processing what the monetary gains of their digitised art mean for the environment.

So much so, that when Pitchfork polled a selection of climate-focused indie musicians to understand their thoughts on NFTs, she had the following to say:

Having headlined festivals, sold out stadiums and amassed decades of recognition, Coldplay announced when promoting their last album, Everyday Life, that they would no longer be touring “if it's not carbon neutral”.

World tours from bands of this calibre are an environmental nightmare that require the transportation of hundreds of thousands of fans, crew, and equipment.

They played just three shows in this period - one at London’s Natural History Museum and two in Amman, Jordan, which were streamed worldwide.

Living through pandemic concert streams has taught us that nothing quite beats concerts, but the band are insistent that time touring will be spent formulating a tour that benefits the environment, rather than taking from it.

It appears to have had an impact - later that week fellow Brits Massive Attack announced they were handing over years worth of touring data to Manchester University’s Tyndall Centre for Climate Change Research to assess how the industry can do better.

Climate change is destroying the oldest cave paintings in the world