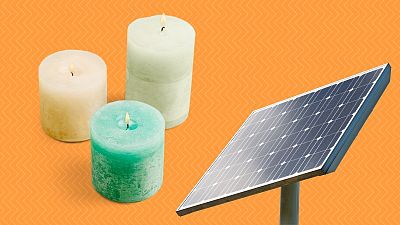 It turns out scented candles may be the key to unlocking clean energy.

A compound widely used in scented candles could be used to store massive amounts of electricity in batteries.

Scientists at the U.S. Department of Energy's Pacific Northwest National Laboratory (PNNL) have found that a bright yellow powder, known as common fluorenone, is a frontrunner in using low-cost organic compounds that step away from traditional lithium-ion batteries.

The material has proven to be a stable, energy-dense source when partnered with flow battery systems that store energy for grids, despite taking some “chemical persuasion” at first.

This could address lingering problems the use of traditional energy grids have with lacking sustainability and longevity.

Promising outcomes suggest the material could one day be used to power solar panels and electric cars.

How does the battery work?

Common fluorenone is readily available as a waste product from coal tar and from the manufacture of benzoic acid, a common food additive.

It can successfully synthesise into a tiny battery no larger than a postage stamp that holds incredible energy density, losing only 3 per cent of its energy capacity throughout the duration of the experiment.

PNNL’s battery operated continuously for 120 days, ending only when other equipment unrelated to the battery itself wore out. The battery went through 1,111 full cycles of charging and discharging, the equivalent of several years of operation under normal circumstances.

The speed and high energy retention of this battery could sidestep many of the issues that come with keeping clean energy grids going in the face of structural and severe weather challenges.

"This is a great demonstration of using molecular engineering to change a material from one widely considered impossible for use into something useful for energy storage," says Wei Wang, who leads the flow battery team.

"This opens up important new chemical space that we can explore."

PNNL played a significant role in developing another alternative battery, vanadium redoxes, which are now used to power some solar and wind farms.

They have since received a lot of funding and attention from clean energy investors due to their durability and near-limitless capacity to produce almost unlimited energy.

It’s not as plain sailing as it might sound - critics of the technology say it is expensive, not easily available, and prone to price fluctuations. For that reason, scientists here are keen to pivot their focus to organic materials.

"These organic materials are made out of the most common materials available - carbon, hydrogen and oxygen," explains Wang.

"They are easily available; they don't need to be mined, as substances like vanadium do. This makes them very attractive for grid-scale energy storage."

How a TikTok trend led to hundreds of abandoned ducklings