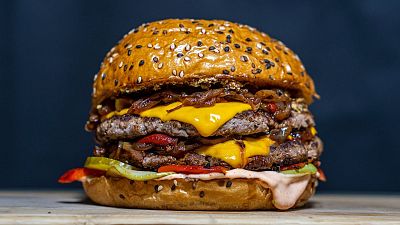 A new study shows how a ‘disgust’ for certain meats could be used to reduce animal consumption.   -   Copyright  Unsplash - Amirali Mirhashemian
By Hope Talbot  •  Updated: 12/05/2021

Have you ever looked at meat, and found yourself feeling sick, or even disgusted, at the idea of eating it? For vegetarians, this feeling is almost an expected part of their choice to avoid meat altogether.

However, in a new study run by the University of Exeter, carnivores have also been found to experience similarly disgusted reactions when presented with images of meat.

As part of the study, more than 700 people comprising both vegetarians, meat-eaters and flexitarians (those who try to eat less meat), were shown pictures of meat dishes commonly eaten in the UK, such as chicken and bacon.

On the whole, meat-eaters rated images of meat twice as disgusting on average as pictures of other foods, such as bread, chips and rice.

In trying to understand why people continually eat meat, despite this visceral reaction, researcher Elisa Becker says that factors such as “habits, family and cultural tradition all play a part” in determining our diet and food habits. Meat still plays a significant role in popular food culture, she adds.

How can this study help people cut down on their meat consumption?

In the aftermath of the study, Becker said that willpower alone may not be enough for those wanting to cut down on eating meat. Therefore, by harnessing the ‘yuk factor’ of your consumption, this has the potential to help meat-eaters cut down.

Becker goes on to state that this is a universal experience, and may have been a part of human evolution.

"Humans may have evolved a degree of meat disgust because eating spoilt meat can be much more dangerous than eating a carrot that's a bit ‘off’."

By utilising this evolutionary disgust, we might be able to stop eating so many animals, a habit which has a reputation for unsustainable practices, and may be the key to reducing the likelihood of future pandemics.

What is the future of meat?

Due to the gaining popularity of campaigns such as Veganuary, and an expansion of vegan and vegetarian options in European-wide supermarkets, meat and dairy consumption is slowly reducing.

Recently, studies have also predicted that plant-based alternatives will surpass meat products, with meat consumption in decline by 2035, as meat and plant-based products reach a parity on price and popularity.

It seems that an end to eating meat, or at least a reduction in our current consumption, will be a consistent food trend in the coming years.

Why might veganism be more popular with women than men?