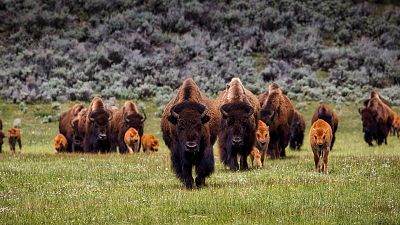 Thousands of Americans have applied to a lottery in the hope of winning a chance of shooting bison at the Grand Canyon, Arizona.

Over 45,000 applicants vied for only 12 spots advertised by the US National Park Service (NPS). They will help cull the animals after the service reported their population had become too large.

Officials claim that the bison had been trampling on archaeological and other resources, and spoiling the water in the North Rim area.

“Skilled volunteers” were requested to shoot and kill the bison to prevent any more environmental damage from taking place. But the event is not being classified as a hunt as it doesn’t involve what they call a fair chase. Hunting is prohibited within national parks, but the agency has the authority to kill animals that harm resources, using park staff or volunteers.

Despite the gruelling work involved (climbing to elevations of 2,438 metres and a ban on using motorised transportation to retrieve the bison) many have not been deterred from applying and the competition is fierce.

“Just keeping my fingers crossed that I’m one out of 12,” says Rich Dawley Jr. a 29-year-old farmer from Gettysburg, Pennsylvania who applied. “You can’t win unless you play.”

James Vasko, a 27-year-old who works in real estate and farms in Omaha, Nebraska, says, “I just thought it would be a cool experience.”

“I’m an avid fisher, hunter. Going to Grand Canyon to hunt bison would be absolutely awesome.”

The department will select 25 names through a lottery, vet them and forward finalists to the park service. The volunteers who are selected will find out on May 17.

By 2025, the National Park Service will reduce the size of the Kaibab Plateau (formerly the House Rock) bison herd through live capture and transfer to native tribes, and lethal culling with skilled volunteers, the NPS states on its website.

Grand Canyon National Park is reducing the size to under 200 “in order to protect park resources from the impacts of the bison population”.

Matt Mallery, an archaeologist in Flagstaff who applied, says using volunteers is cost-effective, logical and provides an opportunity to harvest organic meat that can be cost-prohibitive through the state hunt. Removing bison also helps keep the ecosystem in check, he said.

“It needs to happen for management purposes,” adds Mallery. “And if it’s going to be somebody, it may as well be me.”

But some environmentalists warn the cull could set a dangerous precedent in future.

Are bison helping or harming the environment?

Bison have long been considered as skilled managers of nature’s ecosystems.

The species are able to change the environment they live in through their natural behaviours. They fell trees to allow space and light in dense woodland, producing deadwood as a result that encourages insects and fungi.

They are described as “symbols of strength and determination” by WWF, after surviving the Ice Age. Clearing away snow and brush with their massive heads, they weigh up to 2,000 pounds and can run up to 40 miles per hour. Once numbering 30-60 million in North America, their numbers were decimated in just a few decades as the expansion of human settlements pressed westward, claims the wildlife charity.

No other species on Earth has declined so quickly. Several Native American tribes are working with WWF to grow bison numbers once again across vast grasslands under their management.

Bison are still in great danger and are listed as ‘near threatened’ on the IUCN Red List. So culling the remaining few is a contentious decision.

Indigenous organisation The Sioux Chef has started a petition to stop the event from going ahead at the Grand Canyon, calling it a “Trump era decision”.

“Help find a way to stop this action. Slaughtering this many bison without proper tribal consideration is wrong,” says the Native American group.

“These animals can find new homes and would [be] welcomed by many tribes across the US. In the 1850s the US government killed millions of these animals as means of weakening indigenous communities across the west to ensure a campaign to take over their lands. This modern day effort to kill these animals is triggering. Help to make this Trump era decision reversed if it’s not too late.”

Animal rights organisation PETA is also opposed to the bison culling, calling the event a "sponsored slaughter of magnificent, iconic animals" and likening it to trophy hunting.

"This hideous exercise in trophy taking will do nothing to control bison numbers in the long-term, because such “culling” – a euphemism for killing – only causes animal populations to rebound when the loss of herd members results in a spike in the food supply. If killing actually reduced animal populations, lethal methods wouldn’t be proposed year after year after year," PETA’s Director Elisa Allen told Euronews Green.

She concludes, "Adding to this cruel, pointless fiasco is the fact that it can be difficult for hunters to get a clear shot, causing the animals to endure violent, slow, painful deaths. Nature is far cleverer than humans and has its own ways of managing populations without human intervention. We will never achieve ecological harmony through the barrel of a gun."