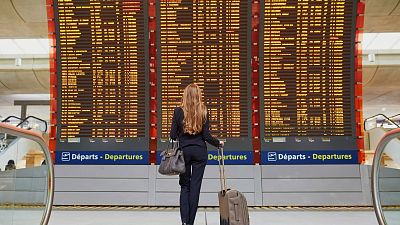 A frequent flyer tax is being tallied as one of the air travel industry’s only solutions for meeting Europe's climate targets.

After France’s announcement that the country will stop all domestic flights that could be carried out by train in less than 2.5 hours, the pressure is on for other nations to reassess how they can curb rising demand for air travel.

If aviation were a country, it would be the world’s 7th worst polluter. But this statistic fails to acknowledge that multiple studies show the majority of flights are actually only undertaken by a small minority of frequent flyers.

Greenpeace has long-supported the implementation of a “frequent flyer levy” - a tax that seeks to weed out unnecessary travel undertaken by those that can afford it.

If this policy took shape, it could halt the aviation industry from becoming the world’s biggest source of carbon emissions by 2050.

Frequent flyers are responsible for over half of aviation emissions

Climate campaigners Possible found that the worldwide economic inequalities are just as accurately reflected in who chooses to use air travel.

In Europe, the bulk of air travel is undertaken by as little as two per cent of people in places like France, where half of the country do not fly regularly, if at all.

How would a frequent flyer tax work?

A frequent flyer tax would not target individual travellers and families that book foreign occasional trips. It would instead take the shape of a progressive tax that targets people in proportion to how much they fly domestically and abroad.

Possible have proposed a framework for how this could pan out by using the UK as an example.

Each year, every person would be given a tax-free return flight, with the tax kicking in at a low rate and rising in increments for every extra flight onwards.The money collected from this would then be put towards environmental initiatives to offset the impact of the remaining flights.

The UK is a worthwhile place to start in addressing the problem. Before COVID-19, the number of flights between two of the UK’s largest cities, London and Manchester, stood at 12 a day. The same journey by train takes just 2 hours.

How Europe could address the problem

As COP26 looms, many people will be waiting to see if a frequent flyer levy is tabled as a way to meet the stricter, more ambitious climate targets announced by the UK and the European Commision over the past year.

The last time this was discussed in depth was during a conference in 2019, where Europe was criticised as the world’s worst continent for aviation taxation. During this the Netherlands took the lead in proposing a “no-brainer” EU-wide strategy that veered more into fuel-specific taxation than addressing frequent flying.

Before COVID-19, the number of flights between two of the UK’s largest cities, London and Manchester, stood at 12 a day. The same journey by train takes just 2 hours.

The problem with loyalty programmes

The aviation industry has created many pathways that incentivise, rather than discourage, frequent use of air travel. Frequent flyer programmes allow people to “clock up” air miles in exchange for rewards and discounted trips.

Many multi-billion euro operations will argue that these practices are essential to ensure a clean economic recovery post-COVID 19, but there’s nothing clean about the generational ramifications of failing to address increased flight usage.