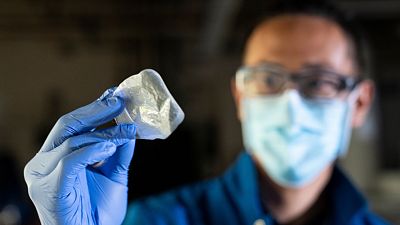 A new technique to make biodegradable plastic fully compostable has been discovered by scientists at the University of Berkeley, US.

Biodegradable plastics are supposed to break down into water, carbon dioxide or in contact with other organic materials (fruits and vegetables) in the compost bin.

But in reality, most of them take as long as regular plastic bags to disintegrate, or need to be brought to an industrial composting centre to be recycled under high temperatures - a not so green virtuous circle in the end.

This new study claims to have developed a new plastic that can degrade by up to 98 per cent in household compost in just a few days, simply by adding heat and water.

How does it work?

The study is the result of ten years of research by 14 members of the Californian university. Its full title isn’t easy to get your head round, unless you're a scientist yourself: ‘Near-complete depolymerization of polyesters with nano-dispersed enzymes’.

But the concept can be explained more simply. Professor Ting Xu, who contributed to the research, explains how this new material is made with built-in enzymes, just like human digestion.

The enzymes interact with synthetic polymers (a generic class of plastics) in a chewing process, turning them into tiny non-toxic molecules, nanoscopic to the eye and harmless to the soil.

“We succeeded in degrading the polyesters into small molecules that are essentially food for microbes to ensure environmental compatibility,” says Ting Xu.

“The success is that now we can modulate polyester degradation rate and program the degradation latency such that they maintain integrity during manufacturing, storage and usage, but degrade when triggered, “ he adds.

The research team based their observation on biodegradable polyesters (a sub class of plastics), such as polycaprolactone (PLC) and polylactic acid (PLA).

The whole chewing-thanks-to-the-built-in-enzyme process was only possible as the team experimented under hot conditions.

Plastic didn’t make its appearance on Earth until the early 20th century, but now only 9 per cent of the world’s plastics are actually recycled.

Coming up with biodegradable products such as spoons, food wrapping or coffee cups was the first step to urgently reduce plastic pollution.

The second step may be Professor Ting Xu and co’s discovery.

“I personally don’t see it as a challenge, just a natural next step,” he adds.

The following episode for this new material will probably have to level up, from the scientific field to the commercial one.

“We don’t know the exact formula from each manufacturer. Now we just have to test with market availed products so we can get this to customers’ hands ASAP".