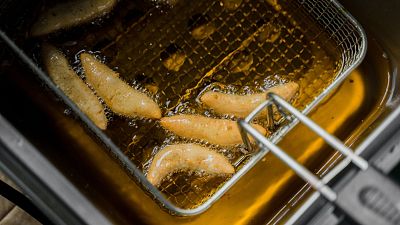 Europe is relying on dubious imports of used cooking oil as part of its green fuel scheme, according to a new study by Transport & Environment.

Used cooking oil (UCO) is waste. It derives from oils and fats that have been used for cooking or frying in the food processing industry, at restaurants, in fast foods and at the consumer level in households (e.g. soybean, canola, corn, grapeseed, sunflower or animal fats).

The oil can be refined into different types of biofuel used for power generation, transport or heating providing a renewable alternative to fossil fuels. It is also known as “yellow grease” or “liquid gold.”

But with the amount of biofuel made from UCO increasing by roughly 40 per cent every year since 2014, there simply isn’t enough produced for this method to be sustainable, says the report.

China supplies over a third (34 per cent) of Europe’s UCO imports with almost a fifth coming from Malaysia and Indonesia. While the oil is considered a waste product in the UK for example, UCO is used in some Asian countries as animal feed.

So with our imports set to increase by 2030, the report raises the question of what these countries are replacing the oil with. Could it be palm oil?

Within the next decade, the volume Europe needs could double to 6 million tonnes as EU countries work to meet their targets for renewable fuels in transport.

As a result, this could trigger more palm oil being used in exporting countries - which means more deforestation.

“Europe’s thirst for used cooking oil to power its transport sector is outstripping the amount leftover from the continent’s deep fryers. [...] Countries that would use UCO for animal feed and other products may end up exporting theirs while using cheap oil, like palm, at home,” explains Cristina Mestre, biofuels manager at Transport & Environment.

It also leaves room for fraud, as UCO is often traded at a higher price than virgin oil. This increases the risk that virgin oils could be fraudulently mixed with imported UCO. Palm oil production is one of the key drivers of deforestation in Southeast Asia and increasingly in South America.

Oil palm plantations currently cover more than 27 million hectares of the Earth’s surface. Nowadays, forests and human settlements have been destroyed and replaced with ‘green deserts’, according to Rainforest Rescue.

“Few people realise that almost half of the palm oil imported into the EU is used as biofuel. Since 2009, the mandatory blending of biofuels into motor vehicle fuels has been a major cause of deforestation,” states the charity.

What other renewables should we be using instead?

The EU’s Renewable Energy Directive will be reviewed in June, including the rules that govern renewable fuels in transport. Transport & Environment, which commissioned the report, is calling on the EU to limit UCO in transport and improve monitoring to avoid fuelling deforestation.

But in the meantime, Europe should rely more on other renewable sources.

"The EU should not rely on a fuel that cannot be sourced sustainably in sufficient quantities. UCO can contribute to transport decarbonisation, but we should not be taking it from countries that also need it in their own efforts," Cristina Mestre tells Euronews Living.

Mestre recommends sticking to e-kerosene and hydrogen rather than depleting our supply of waste oil.

"Ultimately, renewable electricity for cars and trucks, e-kerosene in aviation and green hydrogen in shipping are all better alternatives than the limited supply we have of waste oil."

These hairdressers have found some surprising uses for recycled hair