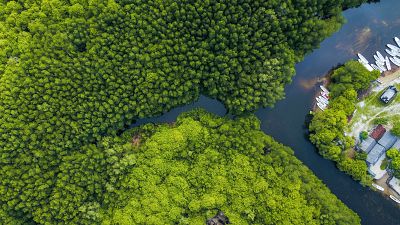 They may only cover 0.1 per cent of the planet’s surface, but mangroves could quite literally save the world.

The coastal trees found in over a hundred countries are increasingly being discussed as a cornerstone of various environmental policies and protection initiatives. These plants are capable of withstanding conditions unlike any other trees - all while fighting climate change and supporting local economies.

But mangroves are also under threat. More than half have been lost to oil spills and deforestation, and these saline forests are disappearing at a quickening pace.

What actually are mangroves?

Right, it’s confession time. I’m an environmental journalist, and have been for a while now, but I’ve struggled to fully understand what mangroves actually are. It turns out, I’m not the only one who can’t quite articulate the concept.

Do you know what mangroves are?

This is because the word ‘mangroves’ is used interchangeably to describe a few different things.

In its simplest form, a mangrove is a small tree or shrub which grows along the coast in brackish or saline water.

But the term is used both more widely and more narrowly too - which is where the confusion often arises. In the broadest sense of the word, we use ‘mangroves’ to describe entire ecosystems and habitats created by these salt-loving plants, often referred to as mangrove swamps or forests. And sometimes, being much more specific, the term only refers to the Rhizophora genus of these trees - also known as ‘true mangroves.’

For the sake of this article, I’m mainly using the word ‘mangroves’ in the most general way, focusing on the ecosystems, rather than the individual trees.

Where do mangroves grow?

Mangroves are present in over 100 countries, all within tropical and subtropical regions. But just 15 countries are home to three-quarters of these saline forests:

Nearly half of the world’s mangroves are in Asia alone, which is unsurprising when you learn that Indonesia contains 23,143 km2 of mangrove forests - more than the next five countries combined.

But Asia is also where the forests are most at risk too.

How quickly are mangrove forests being lost?

Historically mangroves have been disappearing at a rate of around 3-4 per cent a year. Over the last two decades, however, that figure has been scaled down to 0.2-0.7 per cent. That’s an impressive change, and in part is linked with “improved conservation practices and improvements in large-scale monitoring techniques,” according to marine ecologist Dale Bryan-Brown last year.

But Bryan-Brown and his team also note that these lower rates are also down to some regions now being completely stripped bare of mangroves.

Myanmar is now a major cause for concern. Researchers at the University of Singapore found that the country had far more mangroves in 1996 than previously thought. But that same paper found that over the course of the following two decades nearly two-thirds of these forests were destroyed.

“Between 1996 and 2016, more than 60 per cent of all mangroves in Myanmar had been permanently or temporarily converted to other uses,” explained the paper last year. “These include the growing of rice, oil palm, and rubber, as well as for urbanisation.”

The recent Netflix sensation Seaspiracy touches on the deforestation rate, laying the blame predominantly with aquaculture and fishing practices. These claims have been disputed by people like the Aquaculture Stewardship Council, who argue that responsible shrimp farming (such as ASC accredited farms) cannot deforest mangroves, highlighting that there are other threats facing these vital ecosystems.

Why are mangroves so important?

So we’ve covered what these strange salty shrubs are, where they grow, and how fast we’re losing them - but why are they really so vital? Can they actually save the planet?

The answer is multi-faceted. These plants aren’t just important for one key reason, they play many roles in supporting the health of our planet - which is why they matter so much.

Although we think of the Amazon rainforest as the ‘lungs’ of our planet, that title should really be with mangroves; no other ecosystem is able to store as much carbon.

The saline forests can absorb between double and quadruple the amount of carbon dioxide that mature tropical rainforests take in, and they store three-five times more carbon than places like the Amazon rainforest.

In 2012 alone, mangroves stored 4.19 Pg (petagrams) of carbon. According to researchers at Harvard, deforestation between 2000-2012 meant two per cent of global mangrove carbon was lost - the equivalent of 316,996,250 tonnes of CO2 emissions.

In short, mangroves are one of the keys to preventing climate change.

As well as growing in the sea, mangrove forests are found in brackish water where river meets ocean. The impressive network of underwater roots acts as a filter for sediments, working to clean up our waterways.

They also provide shelter for coastal species which are at risk of extinction due to coral bleaching causes by warm areas and in areas prone to coral erosion and that are more susceptible to tropical storms, mangrove forests can say provide a barrier between the land and hazards

They also help maintain water quality for other living organisms nearby, like coral reefs - and they can even prevent mass bleaching events.

They may only take up a fraction of the earth’s surface - just 0.1 per cent - but mangroves are home to nearly 60 unique species.

There are 40 bird, 10 reptile, six mammal, and one amphibian species which can only be found in this specific ecosystem.

And the forests are important for species that aren’t endemic too, like lemon sharks which prefer to give birth in the shallows. The young sharks spend their first year in the swamps to stay safe.

It’s not just flora and fauna which benefit from mangroves either; there are communities around the world where the forests are an essential source of income.

From small-scale fishing to sustainable logging, mangroves are integral to many people’s way of life.

During the 2004 tsunami disaster in Southeast and South Asia, almost 230,000 people were killed across 14 countries. While even the densest mangrove forest would not have been enough in many areas, some places were significantly more protected and as a result escaped the worst of the devastation.

What does the future hold?

Though the deforestation rates seem bleak, there are undoubtedly reasons to be hopeful.

For a start, conversations about mangroves are no longer the sole purview of marine ecologists and other academics. Those of us without science backgrounds are now talking about them in the same breath as more mainstream rainforests, as we all collectively gain a better understanding of these ecosystems’ potential.

And there are increasing numbers of projects dedicated to the revitalisation, protection and regrowth of mangroves too. From the WWF’s work in this area to EcoViva’s alliance of grassroots-led projects, action is being taken around the world.

There are even mangrove reforesting schemes for individuals to contribute towards - which can be an ethical alternative to some of the more questionable tree-planting projects.

Most important, however, is for change to start at a governmental level. And while places like Brazil have recently voted to repeal legislation protecting mangroves, major political campaigns, like Ocean Unite's30x30, are placing mangroves at the heart of marine conservation strategies.

Every weekday, Euronews Living brings you a cutting edge, environmental story from somewhere around the world. Download the Euronews app to get an alert for this and other breaking news. It's available on Apple and Android devices.

Could the cure for COVID-19 lie at the bottom of the ocean?

Plans to map the entire ocean floor by 2030 are underway