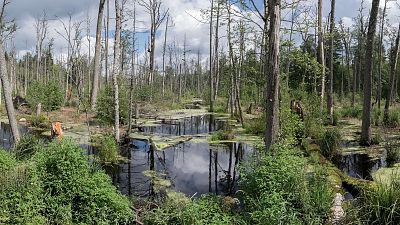 Bialowieza forest is one of the only remaining fragments of Europe's primeval forests.   -   Copyright  Pixabay
By Rosie Frost  •  Updated: 15/03/2021

Logging is set to resume in some areas of Bialowieza forest, one of Europe’s last and largest remaining primeval forests.

The Polish Government announced on Tuesday quotas had been signed to allow trees to be felled in two of the three forestry districts.

Logging was suspended in 2018 after a ruling by the European Court of Justice (ECJ) found the country had broken the law by felling trees that were over 100 years old.

Deputy Climate Minister, Edward Siarka told a press conference that the documents signed this week did not violate the court ruling. He said that logging would not take place in areas of the forest that were more than a century old and felling in the two districts would not start until the breeding season for wild birds has ended.

The government says logging is needed to clear pathways and prevent an infestation of spruce bark beetles.

Anita Sowińska, an MP for Poland’s Spring party, says that it is like convincing patients that closing a hospital was good for them. “We will not allow the minister to destroy our national heritage.”

Alongside other members of Poland’s Left political alliance, she has objected to the proposed felling of several thousand cubic metres of wood in Bialowieza forest and the surrounding area.

Currently only a sixth of the forest is protected as a National Park. Sowińska says the 100th anniversary of its establishment is the perfect opportunity to protect the forest in its entirety.

Why is Bialowieza forest important?

Located on the border between Poland and Belarus, the 141,885 hectare Bialowieza forest is “exceptional in the opportunities it offers for biodiversity conservation”. It has been designated as a World Heritage site by UNESCO since 1979.

The forest has remained relatively untouched for hundreds of years, protected by Russian Tsars and Polish kings as a royal hunting ground. As a small remaining fragment of the primeval environment that once blanketed the continent’s lowlands, the forest offers a glimpse into Europe’s ancient past.

Environmentalists say that logging has had a big impact on biodiversity in the region. White-backed woodpeckers, for example, lost 30 per cent of their population in the 1990s and 2000s in areas of the forest outside of the protection of the National Park.

It is also home to 800 European Bison the continent’s biggest herd. By the early 20th century this species had almost entirely disappeared but conservation efforts have helped Europe’s largest land mammal to escape extinction.

Why kelp forests are crucial in the fight against climate change

Where are the world's tallest trees and why are they so important?