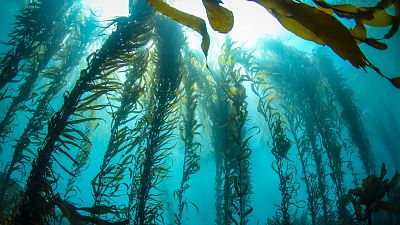 New satellite imagery reveals that 95 per cent of kelp forests in Northern California have disappeared over the last seven years.

Scientists are concerned that only small, isolated patches of the kelp remain in the area’s ocean region.

Kelp is the name given to several species of large brown seaweed. It can form dense underwater forests, which are among the most productive and diverse ecosystems on the planet.

The decline is partly down to an increase in purple sea urchins on the seafloor - spiky creatures known to chomp their way through entire swathes of it. In 2019, a study reported that the sea urchin population had soared by 10,000 per cent in the last five years, devastating the US coastline.

The University of California Santa Cruz has now published new research in the journal Communications Biology. It includes satellite imagery documenting a dramatic shift in the state of California specifically, as a result of both urchins and climate change. For the last seven years, there has been an unusual period of ocean warming along the West Coast, meaning forests have been decimated.

The study shows that kelp forests north of San Francisco were resistant to extreme warming events in the past, surviving other strong marine heatwaves. So scientists predict that the 95 per cent decline of late is due to the loss of a key urchin predator, the sunflower sea star.

Without this predator, urchins multiply and thrive under the sea.

"It's a naturally dynamic system that has been really resilient to extreme events in the past, but the die-off of sunflower stars caused the resilience of the ecosystem to plummet,” says first author Meredith McPherson, a graduate student in ocean science at UC Santa Cruz.

“As a result, the kelp forests were not able to withstand the effects of the marine heatwave and El Niño event combined with an insurgence of sea urchins."

Coauthor Raphael Kudela, professor and chair of ocean science at UC Santa Cruz adds, “the combination of ocean warming and the loss of the sea stars allowed the urchins to take over." This unusual marine heatwave occurring in 2014 is known as “the blob”, which brought warm water up the coast from the south.

"The alignment of all of those events resulted in an incredibly dramatic loss of kelp," says Kudela.

What it means for the future is that the prospects for recovery of the Northern California kelp forests are poor, unless sunflower sea stars or some other urchin predator returns to the system.

So far, one of the only solutions is for divers to manually remove urchins from selected areas to see if that can help the kelp to recover.

But in the long-term, it’s the climate crisis that’s the problem.

"There's really not much we can do except to keep monitoring it. Of course, the long-term solution is to reduce our carbon emissions so we don't have these extreme events,” Kudela concludes.

Why are kelp forests so important?

These magical underwater forests create beautiful habitats and shelter for a whole host of sea life, but they also reduce the rate of global warming.

Kelp grows incredibly fast (up to two feet per day) and exports a large portion of its biomass into the deep sea, allowing it to permanently remove carbon dioxide from the atmosphere.

Coastal ecosystems sequester surprisingly large amounts of carbon, up to 20 times more per acre than land forests, according to a report by Harvard University. Marine plants that contribute to this carbon sequestration, such as mangroves and seagrass, live in rich soil.

The Wildlife Trusts, an organisation made up of conservation charities, emphasises the importance of preserving kelp forests. They play a hugely important role in the carbon cycle of our planet, capturing 75 per cent of the net carbon fixed annually in the sea. Kelp also reduces coastal erosion by serving as a buffer against strong waves.

Losing our kelp forests would cause a ripple effect, impacting the many species that depend on them, says the organisation.

Why octopuses have feelings and crabs should not be ‘boiled alive’