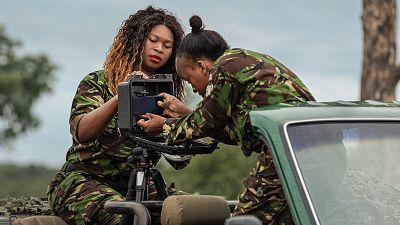 A group of female rangers is inviting people to help tackle poaching in South Africa by watching a 24/7 live stream from Great Kruger National Park.

As part of a two-month pilot scheme, viewers will be able to help protect endangered species by watching them in their natural habitat remotely. While observing animals like lions, giraffes and elephants, you can report any suspicious activity directly to the group’s headquarters.

“The Black Mambas cannot do it by themselves. We need more eyes, more people helping us,” says Leitah Mkhabela, one of the rangers.

Who are the Black Mambas Anti-Poaching Unit?

The live stream is supporting the Black Mamba Anti-Poaching Unit, a group of female rangers based in Balule Nature Reserve, South Africa. The unit was set up in 2013 to create conservation role models in the community.

The Black Mambas use non-violent methods to prevent poaching in the region and educate communities on conservation. They say they are not in the business of creating widows or orphans but are there to act as a deterrent.

Mkhabela explains that she joined because she loved being in the bush, in these quiet places where she can be alongside the animals but also as an opportunity for empowerment, “I love gaining knowledge,” she adds.

Some of them even say that we wasted our time thinking that we can’t do this, looking down on ourselves.

“When I started as a Black Mamba the training that we went through, people are scared of that training. People say that training is for men, we can’t do it because we are women,” she explains. “The hard part was that even women were looking down on us.”

But people started to come around once the impact of the female rangers was clear. It has helped women in the community to see themselves differently.

“People have seen how we want to do this and so many women started to support us. Some of them even say that we wasted our time thinking that we can’t do this, looking down on ourselves,” Mkhabela says.

With help from Samsung, phones have been upcycled to create the live stream but also help the Black Mambas with their work. Two permanent and one roaming camera - attached to a 4x4 which can travel around the park, have been installed that are helping the rangers to catch up to poachers.

“The arms race is not with weaponry, the arms race in anti-poaching is actually with technology,” says Black Mamba CEO, Craig Spencer. “A camera never sleeps. So you can see every time of the day or night.”

The phones are being used for quick and effective communication among the rangers too, replacing notebooks that had previously held up their responses to threats. Information from patrols on the reserve can be easily logged on stored using the technology.

“With the system that we were using, that was too slow to receive information,” says Mkhabela.

“I think there will be a big change since we are going to receive information in time and it will be easy for us to follow up if we have to follow up suspicious evidence.”

Unexpectedly, the project is also helping them to bring local wildlife into classrooms. The Black Mambas run an educational programme that currently reaches 1,300 primary school children in the area. Now the rangers can share what they are seeing in real-time with students helping to further environmental education.

“It's an in situ window into the life of a ranger, protecting the park and it's, hey, that's my mummy, oh, that's my auntie, you know, walking there,” says Spencer.

“And it's a sense of pride, dignity. It's a fantastic model.”