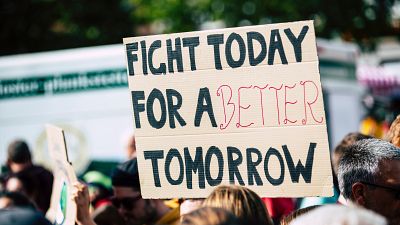 Rupert Read, a professor at the University of East Anglia, offers his take on how, together, we might be able to prevent climate collapse.

Reader, I want to propose a new way to address the great issue of our time: how - even now, at the twelfth hour - we might turn ourselves away from our current path of self-destruction.

Even as I mount this attempt, I am daunted by the scale of the task. Perhaps it daunts you too. And I am unnerved by the seeming inadequacy of the means at our disposal. Haven’t we - and by ‘we’ I mean now our society itself - already shown ourselves terminally incapable of the radical action needed? After all, despite everything we know despite everything science has told us, despite even the opportunity that was afforded us by the coronavirus crisis for a radical reset, we remain firmly on course for burn-up. For an ecologically induced societal collapse.

Of course, we have recently had a shot across the bow, one which even yet might just occasion the massive realignment we need. The terrible, broadly foreseeable outbreak of COVID-19 is itself a product of the ecological crisis: of habitat destruction for the sake of economic growth, of the maltreatment of animals, of economic globalisation. It has made the unimaginable much more imaginable than it was, because, in one key respect, we don’t even have to imagine it: it’s here.

We are, in this long moment, undergoing an experience of planetary emergency, of lived vulnerability, of potential mortality: our own, our parents’, our grandparents’; just conceivably, our society’s. For many of us, especially in the Global North, it’s the first time this has happened in our lifetimes.

Within the horror of coronavirus, then, comes a concealed gift. If we can transfer this sense of vulnerability to the larger emergency - the ecological crisis that is parent to the pandemic - then we will have taken a huge step forward.

What is the nub of my case for how we can tackle this? We need to become parents of the future. How do we do that? By taking the metaphor literally. By understanding that only if we take completely seriously what it really means to be good parents to our children, will it really be enough to take care of the whole future.

What I’m trying to do, by marshalling this particular metaphor, is find a way of helping us face something that we don’t want to face: the destruction we are wreaking on ourselves and, with greater finality, on our children. We don’t want to face it, because to do so will mean we have to grieve deeply - and to change our lives profoundly.

By focusing our minds on the young vulnerable generation that we lavish our love upon, I’m trying to find a way into the problem that will appeal not only to anyone who’s ever had children, but to anyone who understands the duty of care that parenthood entails. Our sense of this duty, I argue, is so strong and sweet that it can, as it were, move the Earth. It is a way of feeling, of waking up, that can move us and, in moving us, will move our children and their children out of the firing line, out of harm’s way.

We don’t want to know

If human-induced climate change were really as bad as all that, then we’d be doing something truly serious about it already... right? If the situation were really as alarming as Extinction Rebellion and Greta Thunberg make out, then surely governments would act?

So, because governments are not acting as if this is an emergency, it seems to follow that the situation cannot be that alarming. Can it really be that we are on the verge of committing human civilisation to oblivion? Surely it would take a true ‘black swan’ event, something utterly unexpected, to accomplish that? Surely if we can see catastrophe coming, then, as rational animals, we’d already be acting to stop it... right?

What will you do? In his new book, Parents for a Future, @GreenRupertRead outlines 3 proposals to aid the fight against climate collapse. Find out more via the website: https://t.co/4VOY1rITespic.twitter.com/d71ujz1Cue

At this point you might well be thinking: And surely we are doing something serious; surely governments are in any case acting; that is what the world’s leaders agreed at the Paris climate conference in 2015. Paris was an extraordinary diplomatic achievement, and, realistically, it is hard to hope for much more. This makes the truth about the accord harder to bear: the much-lauded Paris Agreement on climate is a paper tiger. It’s dead on arrival.

Even if the Paris commitments that countries have made were achieved in full, it would not be enough to stop dangerous climate change. It would, in fact, probably result in around three to four degrees of global overheating, triple what we have so far. That would be enough to demolish our civilisation.

Where should we start?

My three core proposals, to address this desperate situation, are:

1. Citizens’ Assemblies, constitutionally empowered to take the necessary decisions to bring us from incipient disaster to survival and flourishing. ‘Representative democracy’ has failed us; it has put no meaningful obstacles in the way of our ‘progress’ toward nemesis, and thus it badly needs serious supplementation. Politicians should ‘outsource’ this work to assemblies drawn from the citizenry, on a geo-demographically representative basis.

2. Guardians For Future Generations. Sitting above parliament, there should be a permanent panel of Guardians for Future Generations: like the Citizens’ Assembly, this would be a kind of ‘super-jury’ which can radically rein in the short-termism of ‘liberal democracy’. These juries — like all juries — would be highly democratic: with their members picked by lot rather than by vote. Guardians would set us on the road to an enriched democracy that would, in effect, include our kids and their kids and so on, for the first time ever. Finally, we would start to make decisions to act in the long-term interests of people and planet.

3. Adopting the Precautionary Principle. This philosophical, ethical and legal frame-work that would inform the decision-making of the Citizens’ Assembly and Guardians for Future Generations. It states that when you lack full evidence and potential consequences are grave, you need to err on the side of taking care. Of better safe than sorry.

Citizens’ Assemblies, Guardians for Future Generations, and the Precautionary Principle: radical changes such as these, bold and immoderate as they might sound, represent the bare minimum that will be required in order to put us on the kind of path. Fighting for them, or ideas like them, and fast, is therefore the very least we need to do.

So we need a global movement, like ‘Fridays for Future’, in which adults pull together to make such change happen. This movement might be called ‘Parents for a Future’.

..You cannot say you did not know. All that remains is to consider what you will now do..

Adapted from Chapter 1 of Parents for a Future by Rupert Read: go to www.parentsforafuture.org to order the book, just to find out more - or to get involved.