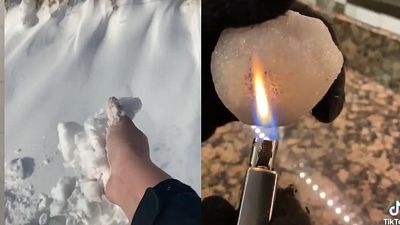 Videos are trending on social media showing people holding a flame to snowballs in a bid to ‘prove’ it is fake.

Extreme weather in US southern states like Texas has caught many by surprise, with at least 58 reported dead from the storm and millions left without power or running water. President Joe Biden has issued a major disaster declaration in response, dispatching federal aid to those in need.

The recent snowstorms were actually predicted many weeks before by meterologists, who say it's linked to a phenomenon known as Sudden Stratrospheric Warming. This happens when the Arctic warms rapidly, disrupting a mass of cold air.

Though this may seem somewhat paradoxical, our warming climate may be exactly what is causing these extreme snowstorms.

But some people believe that the snowfall is “synthetic” and are attempting to prove that the weather is part of a government-controlled conspiracy theory.

I am obsessed with idiots in Texas thinking the snow is fake and a government plot pic.twitter.com/7F0hsLB3hB

Social media users are holding flames up to compact snowballs as ‘proof’ that it is not real snow, while declaring that tech billionaire and philanthropist Bill Gates is somehow responsible for the weather.

“Thank you Bill Gates for trying to f**king trick us that this is real snow,” says a woman in one video. “You’ll see it’s not melting, and it’s going to burn. Snow don’t burn. Snow f**king melts. No water, no dripping, no nothing.”

We spoke with Abbie Richards, a science communicator known for her work on environmental issues (particularly through EcoTok) and debunking conspiracy theories on social media.

"This conspiracy theory feels to me like an incredible example of how a conspiratorial belief system works and how all those beliefs compile into an entirely distorted worldview," explains Richards.

"This conspiracy theory is a combination of climate change denialism, general lack of understanding of science, and a belief an essentially omnipotent group with the ability to control the weather. This is no different than Majorie Taylor Greene claiming that the forest fires, which are worsening because of climate change, are actually caused by lasers in space controlled by Jewish people."

"Here we have extreme weather, which is worsened by climate change, being blamed on a small group of people with unfathomable power to control the weather. They recognise the effects of climate change but would rather blame an imaginary evil group than accept that the cause is actually our way of life," she adds.

Why isn't the snow melting?

It’s important to emphasise that the snow is absolutely real, but the science behind the videos is also pretty interesting.

Some say it’s to do with a process called ‘sublimation’ where matter moves from a solid state to a gas (or vice versa), skipping the liquid stage.

However astronomer Phil Plait debunked similar conspiracy theories in 2014, explaining that because snow is porous, it’s actually absorbing the water back into itself. In a video outlining the phenomenon, he says it is similar to how a snow cone absorbs the syrup when it’s made.

Another aspect that is confusing people, and potentially leading to the misinformation, is the fact that in the videos the snow appears to have scorch marks on the side.

Though this may look unusual, it’s actually very easily explained. The ‘burns’ are coming from chemicals in the lighters themselves, and the same can be observed if you hold a lighter to a mirror or window, for example.

"Soot would ordinarily not be visible when a lighter is burning in open air, but the snowball in this case is acting like a filter, catching and accumulating the black soot particles, which show up quite visibly on the white snow after a few seconds of exposure."

He adds that if the demonstrators in the video held the lighters up for longer, it’s likely they would also see water formation and some dripping.

How is social media dealing with these conspiracy theories?

Where the posts have been shared on the platform, Facebook have added a warning label which highlights that the videos are displaying false information.

This became common practice across most social media platforms after the US election, as the tech companies attempted to limit the spread of voter fraud conspiracy theories. However Facebook is the first of the networks to actively be working to debunk and limit climate change myths.

Climate change denial has arguably been fuelled by social media, with researchers last year noting that one particular group of conspiracy theorists were posting four times as much content as scientists, experts, and campaigners.

To take one example, supporters of the far-right and discredited conspiracy theory QAnon promoted fake stories last year that claimed members of Antifa were responsible for wildfires in the US.

Another paper published last year in Climate Policy found that Twitter bots were producing around a quarter of original tweets discussing climate change and global warming.

“The implications of these findings for climate policy are urgent: discourses on climate change on the widely used Twitter platform appear to be routinely manipulated by mechanized users,” writes Thomas Marlow, a postdoctoral researcher at the New York University along with his co-authors. “Specifically, we found that their presence is very common and selectively focused on skeptical and denialist discourses.”

The role of social media in climate change denial is one many experts are now highlighting, including Professor John Cook, from George Mason University’s Center for Climate Change Communication.

“Twitter bots have been this growing force of evil over a half a decade now,” said Cook to E&E News last month. “It’s important to shut bots down.