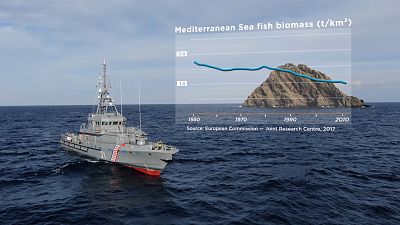 There is a tiny island in the Adriatic sea called Jabuka, which means apple in Croatian. Some might consider that a rather contradictory name for this uninhabited volcanic landmass with difficult and limited access. But to people in this region, its name is now increasingly symbolic. This little apple in the Adriatic represents hope for a healthier, blossoming Mediterranean Sea.

The almost 3000 square kilometers of the Jabuka/Pomo Pit area are a vital spawning ground for hake and langoustine. It has been protected from overfishing since 2017 when scientists, fishermen, NGOs and the Croatian and Italian authorities fought for a breakthrough agreement.

Today, brand-new fishery inspection and coast guard vessels patrol the area, enforcing restrictions in order to slow the decades of decline of the Mediterranean's unique biodiversity. European research shows that a third of the Mediterranean fish population has been lost over the past 50 years. Pollution and climate change have had a hand in this, but the key cause behind this decline would appear to be extensive overfishing".

Protecting key spawning grounds can help turn things around as long as bans are enforced. However, previous efforts to safeguard the Jabuka/Pomo Pit have failed. Fishing continued and stocks were dangerously low. The agreement was only reached when all parties realised that effective restrictions can benefit everyone.

How do they protect Jabuka/Pomo Pit?

Mario Škorjanec is a senior fishing inspector, he says most of the area around Jabuka is now closed to fishing, "vessels are only allowed into a small adjacent area with special authorisation".

Fishing trawlers are allowed in authorised areas outside the invisible “no-take zone” perimeter and that's where they find the best catch.

Fishery inspectors conduct routine checks on these trawlers to make sure everything is in order and above board. Their speedboats can easily catch up with the slower trawlers and officers do their checks once on deck.

Some of the checks include measuring some of the catch. Fish of spawning size and juveniles must be protected. Special instruments are also used to check that fishing gear complies with regulations. Rules specify the smallest opening allowed in nets and any infraction does not go unpunished.

Inspectors are allowed to check the boats' papers and their electronic logbooks that contain detailed records of all their fishing trips. Fishermen say they don't mind all the checks, they can see that the restrictions are working, because their catches are growing again.

Zlatko Šepić is a trawler captain in the area, he tells us that they still get less fish than they did in the 90s, "but over the past year, the catches have been improving, especially species like hake which must be a result of the Jabuka Pit restrictions".

Checks also take place on land. Every boat working in this area, big or small, must have a vessel monitoring system (VMS) that sends its real-time coordinates to a government office in Zagreb. Specialists at the Croatian Directorate of Fisheries have even developed new software to help track fishing boats. Just one click on their electronic map reveals detailed information from any vessel, including its precise trajectory at sea. Crossing the line into the prohibited area will be detected.

Misclav Sokol, an expert advisor at the Fisheries Monitoring Centre described how the system works to us. He says it's semi-automatic and works 24 hours a day, "it gets all the data from VMS and electronic logbooks, combines them, then we get alerts when something is wrong". The fisheries monitoring centre can then report this to inspectors.

The monitoring centre also works with the military and receives live video from surveillance drones that operate over the sea. The drones can reveal evidence of wrongdoing from kilometres away.

These drones and other vessels used for fishery controls are supported by the European Maritime and Fisheries Fund. The EU considers stopping illegal fishing a key objective. The European Fisheries Control Agency coordinates inspection, surveillance and checks in these EU waters. They're working with all the region’s countries to improve the overall situation in the Mediterranean.

Pascal Savouret, the Executive director at the European Fisheries Control Agency emphasises that in order to protect the Mediterranean sea, "it is necessary to improve the exchange of data, to improve the tracking of ships through the installation of satellite tracking systems. There is also a need to strengthen control plans and risk analysis, and of course to carry out control operations, with full cooperation between the Southern and Northern Mediterranean states".

Perhaps the positive results in the Jabuka/Pomo Pit area will inspire other parts of the Mediterranean.

Researchers at the Institute of Oceanography and Fisheries have already analysed data from marine surveys, commercial landings and international studies. They conclude that the key fish populations are recovering faster than expected. It seems that protecting a small fraction of the sea has triggered a knock-on effect throughout the Adriatic.

The restrictions have worked in part because they were not imposed by the authorities but emerged as a joint initiative between scientists and fishermen.

Nedo Vrgoč is the Director at the Institute of Oceanography and Fisheries in Split. He says "the fishermen see these measures as their own". They have been so successful that "fishermen come to our institute and suggest other similar measures".

It's a win-win: marine biodiversity is recovering, consumers are enjoying a growing choice of fresh seafood and the fishing industry is making a profit from increasingly abundant and valuable catches.

This last positive is very easy to see at the historic fish market in Split where most of the fish comes from the Jabuka area. Ana Vučemilović is a Fishmonger there. She tells us that "since they closed the Jabuka Pit, the fish around it have grown bigger (...) In the past that was rare".

A healthy sea is vital for people living on the islands. The town of Komiža on the island of Vis, some 70 km east of Jabuka, relies on tourism and small-scale fishing to survive. A few years ago, the catches fell so low that going out to sea on a small boat was no longer worthwhile. But today, the pessimism of that period seems to have gone. Local fishermen say that there are now more boats and even new fishermen appearing from younger generations because they see a future in fishing again.

According to recent studies, protecting just five percent more of the ocean would increase future catches on a global scale by at least 20%.

As Joško Pedišic, a vessel owner in the area says "by restricting one small part of the sea, we can preserve the fish for future generations, for our children".