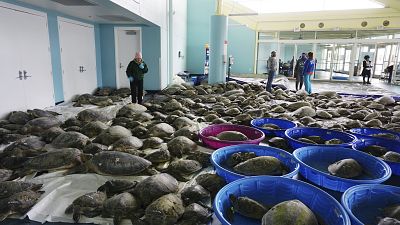 As the southern US faces unusually cold weather, more than 4,000 “cold-stunned” sea turtles have been rescued in the Texas beach town of South Padre Island.

Despite facing power outages and problems with water and heat, residents have been volunteering to try and save the endangered turtles from the unusual cold snap.

Turtles rescued from the Gulf of Mexico are being taken in by Sea Turtles Inc, a rescue and rehabilitation charity in the area. But they quickly ran out of space and the overflow had to be housed in a local convention centre.

Conservationists in the region worry that despite their efforts, some of the turtles could still be lost.

“A cold stun like this could have the potential to wipe out decades of hard work, and we’re going through it with no power and a unique, more catastrophic challenge to our efforts,” Wendy Knight, executive director of Sea Turtle Inc. told The Washington Post.

Cold stun is a condition that sea turtles experience where temperatures below 10 degrees celsius cause the cold-blooded animals to become lethargic. This means they are unable to swim or feed causing them to wash up on beaches.

Local conservationists have been trying to gradually warm up the turtles but a shortage of power has been hampering their efforts. On Wednesday, SpaceX delivered a generator to the facility from its nearby launch site to help warm tanks and pools at Sea Turtle Inc.

What is happening in Texas?

A deadly storm has swept across the southern US this week. It has caused some of the coldest temperatures Texas has seen in over 30 years as conditions dropped to -18 degrees Celsius earlier this week.

The storm has caused several deaths and left millions without power as poorly prepared electricity grids failed to cope with increased power demands and icy conditions.

Experts have warned that the snowy weather may be a counterintuitive effect of global warming.

More than 100 million Americans fell under a winter weather warning by Wednesday afternoon, according to the National Weather Service.

Experts have warned that the snowy weather may be a counterintuitive effect of global warming. The rapid heating of the Arctic could be pushing cold air further south leading to unusual snowfall in warmer regions like Texas.

Southern Europe has also been covered in snow for the first time in decades. The Greek capital, Athens saw its worst snowstorm in 20 years which left parts of the city without power and water.

'Do Not Disturb': Walkers in France asked not to frighten seals

Could cloning save this endangered horse species from extinction?