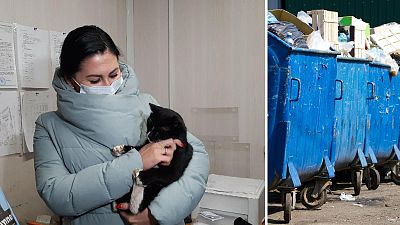 This cat had been rescued from a rubbish sorting facility in December, 2020   -   Copyright  Instagram/Ministry of Natural Resources of the Ulyanovsk Region
By Doloresz Katanich  with AP  •  Updated: 26/01/2021

A cat has been saved at a waste processing facility in the Russian city of Ulyanovsk.

Kite, as he has now been named, was found taped inside a thick bag of sugar which had been thrown away to get sorted. An employee discovered the terrified animal, just seconds before he was due to be crushed by the waste separator.

This is not the first time workers at the facility have had to rescue abandoned pets. Over the past few months, the team has also saved two turtles and a hedgehog, all of whom now live at the facility.

"Each of our operators that are standing at the sorting line are making incisions on each package," says the director of the waste processing facility Igor Perfilev.

"The cat has survived by a miracle because the garbage track has its own press. Firstly, he got lucky there. In total, it survived two times, thanks to the fact that our operators stopped the sorting line in time and we have given the animal a second life," he added.

After the director reported their discovery to officials, the Minister of Nature and Cyclical Economy for the Ulyanovsk Region personally visited the plant and adopted the cat immediately.

He has now settled into his new home and has even been appointed 'Deputy Minister' at the region's Ministry of Environment.

The trash mountains being turned into sustainable fashion in Russia