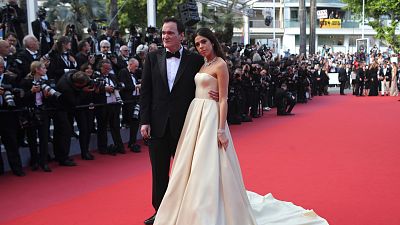 Quentin Tarantino and his wife at the Cannes Film Festival   -   Copyright  Petros Giannakouris/Copyright 2019 The Associated Press. All rights reserved.
By Madeleine Drury  •  Updated: 25/01/2021

The average tentpole production – a film with a budget of more than $70m – generates 2,840 tonnes of CO2. This could take you to the moon and back six times.

Undoubtedly, the film industry has played its part in exacerbating climate change on its own doorstep.

“It’s very easy to say, ‘Climate disaster! We’re all going to die! It’s all too big! I can’t cope!’” says Michelle Whitehead, project coordinator of the Screen New Deal report, in a joking panic. “But it has to be a collaborative effort. That’s what the Screen New Deal is brilliant at: having a tool to engage.”

The weighty document tackles the systemic changes the film and TV industry must make in order to achieve a net zero target of 2050. Through intensive research into new technologies such as energy efficient data farms and sustainable studios, the report offers a series of constructive recommendations for production companies/studios to adopt during the entire lifecycle of a production.

Whitehead smiles as she discusses the response in recent weeks, “It’s been really useful to share the big-ticket items: power, transport, not plastic.”

Among the innovative suggestions like material passports for studios to share props and sustainable location libraries, the enemy of plastic ranks low in priority. The report’s research demonstrates that transport has the largest impact on the carbon footprint of a film shoot, accounting for around 51 per cent of total emissions on tentpole films.

Transport has the largest impact on the carbon footprint of a film shoot.

Whitehead is keen to highlight that it offers positive suggestions for productions in a time when environmental regulation in the film industry is limited. “This will be a part of it, but regulation is slow.”

She adjusts her glasses, and nods firmly, “what we are saying to them is don’t wait for policy because that’s too late. Start building it into your plans now.”

When independent filmmaker Joya Berrow decided to use sustainable practices on her documentary Eve, she was knee-deep in the English countryside. “When you’re just staring out into a deep forest canopy, there’s no noise, there’s no anything that really adheres to this feeling of being in a city.”

Filming one of the world’s oldest off-grid communities for Eve, Berrow was inspired by a sense of resourcefulness that was born out of survival rather than responsibility.

“The food that we ate was all from the community, so we ended up eating squirrel pie one day. I really didn’t like it.”

Despite dedicating her filmmaking career to telling green stories onscreen, Berrow hadn’t deliberately factored in her environmental impact behind the camera. Energised by the community’s efforts, she retrospectively calculated the carbon footprint of her short.

“What it really highlighted is that it’s more important to mitigate through your decision-making from the start than to offset at the end. Offsetting isn’t really a solution.”

People who work in film are incredibly creative. They will rise to the challenge.

The impact of her film was small, about the equivalent of a return flight to LA. But she hopes that by acting on principle, it will encourage big-budget filmmakers to do the same. “I’m showing that there is another way of doing it so that these long-form series get a push up the bum.”

Whitehead echoes Berrow’s principled optimism. When asked if the Screen New Deal’s recommendations might limit filmmaker’s creativity, she replies, “people who work in film are incredibly creative. They will rise to the challenge.”

In the US, one woman is rising to that challenge, in her characteristic green gloves. Environmental consultant Emellie O’Brien can often be found rummaging through the detritus left behind by a hungry production crew, a habit that formed in 2014 on the set of Noah.

“It was one of the most brutal shoots I’ve ever experienced,” she says from her office in New York.

O’Brien was originally hired as an environmental steward. “I was really a one-woman show juggling on-set recycling, composting and food donations.” The role was very new; O’Brien often found herself tackling huge tasks such as measuring the carbon footprint of the $125 million movie, while trying to recover discarded set.

Flash-forward to 2021 and O’Brien now leads a whole team at her consultancy Earth Angel, a nickname that stuck from her early days on the set of Noah. “Sustainability is complex and ever-evolving and it’s honestly a way bigger job than just what one ‘environmental steward’ can achieve on one production.”

As an independent filmmaker, Berrow has a message for O’Brien’s bosses, the Hollywood moguls. “There is a lot of greed and ego boosting,” she says.

Do you really need that many lights? That many cameras?

O’Brien argues that their shared industry has not done enough, “If we’re going to overcome this crisis, we need to shift culture. Entertainment is the most influential way to shift culture. We have not leveraged our industry enough in this fight and I think we can unlock massive change.”

Whitehead shares this charged enthusiasm. “The Screen New Deal is very much a vision, a slightly hypothetical document. And now we have to bring it into reality.”