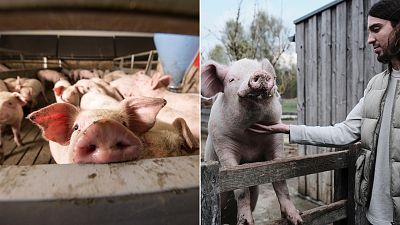 2021 feels like a fresh start for many of us. There might still be a global pandemic raging, but the vaccinations are rolling out and we’re starting to see a light at the end of the tunnel.

Animal welfare activists have cause to be hopeful too, as more people have chosen to start the year by going vegan than ever before. Whether it’s wanting to ward off further animal-borne pandemics, a desire to eat more healthily, or climate anxiety, the plant-based movement is soaring in popularity.

That’s why I sought out my favourite plant-based influencer to give us his take on where veganism is at in 2021.

Ed Winters, known as Earthling Ed, is one of the most famous vegan educators in the world. With over 500k followers on Instagram and a TED talk boasting 1.5 million views, he’s taken veganism into the mainstream.

I first discovered Ed around three years ago when he appeared on the ITV breakfast television show, This Morning. He said he felt like a hypocrite when calling himself an animal lover and describes the moment when the penny dropped. After watching a documentary called Earthlings, he decided to give up meat and dairy forever.

I’ve continued to follow his work since and am always gripped by his videos. Far from being preachy, his points are simple and logical - and hard to argue with.

I’ve watched him travel all over the world debating the concept of eating animals. From challenging sharp, young university graduates to starting up a dialogue with pig and dairy farmers in remote parts of the US, he connects with all sorts of people.

Ed doesn’t believe there is a humane way to slaughter an animal. But even if you don’t subscribe to the PETA rhetoric, he’s just as persuasive on the environmental and health benefits of going plant-based.

He starts the conversation many of us are uncomfortable having.

Click on the video above for Ed’s take on the 4 reasons veganism is going to explode in 2021.

Ed Winters is a vegan educator, public speaker and content creator based in London, England.

Can going vegan really cut the carbon emissions of the food you eat?

Why is this rebel community in Spain fighting back against wind farms?