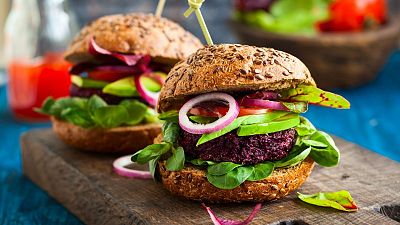 I’m doing Veganuary and it’s been tough for a multitude of reasons. Not because I’m usually a big meat eater - as it happens, I’ve been called a ‘vegan food enthusiast’ on more than one occasion.

What I have found tough is that I also took myself off bread, potatoes, rice, pasta and meat or dairy alternatives, save for one blowout each week. This blowout is where I’ve tried as many of the new vegan-friendly meals hitting restaurants across the UK.

At least the age of the burger is done. I praise the name of the advocates for choice in plant-based food. And the rise of the watermelon at the front and centre of a meal is something I’d like to see continue. The remainder of vegan options are invariably carb-heavy and I much doubt I’ll be able to look at another chickpea curry when this month is over.

These are the highlights and lowlights of my discovery of new plant-based options so far.

With Greggs sold out for miles around, I was forced to start taking longer and longer detours on my way into the office to find a branch that hadn’t entirely sold out by 9:30am. But oh boy, it was worth it.

The vegan steak bake had a lot to live up to, when compared to the runaway success of the vegan sausage roll launched in 2019. The end result is indistinguishable from its meaty counterpart in that it’s hot, kind of sludgy, and very salty. In fact, if you told me the original was meat-free as well, I’d not be surprised.

Its only giveaway is slightly anaemic looking pastry that might be helped by a plant milk wash before baking. In conclusion, it’s great and I’m excited for the inevitable vegan-friendly sausage, cheese and bean melt that must surely follow.

Drench anything in a garlic and chilli marinade before chargrilling it and I’m game. I was not expecting that to extend to a watermelon steak but I went for it.

Yes, it’s a bit wet for a steak. But it’s a watermelon. A bold departure from the raft of sweet potato, mushroom and corn burgers offered by TGI’s counterparts, and surprisingly flavourful for one of the blandest fruits known to man.

Potentially a bit of a novelty for some, but I’d order it again.

This is far from a bad burger. Yes, it could do with a bit more spice and more of that secret recipe coating KFC is famous for, but overall this is a solid effort from a brand previously committed to chicken.

Though, it has hardly rolled out the welcome wagon as committed vegans probably won’t be able to get a full meal because its chips are fried in the same oil as the chicken. However, the Quorn burger is baked, not fried so you can feel smug and healthy.

This is stuffed full of one of the best vegan cheeses out there. It melts in a pleasingly gooey way, familiar to the most dedicated of dairy lovers.

The ham is overshadowed by the cheesiness of it all save for the slightest hint of smoke and a slick of mustard, which is probably the best way for a toastie to taste.

I'm gutted they've decided to take this off their menu, but the coffee brand has instead come back with a vegan BBQ chicken pastry, which I can't wait to try!

Of all these options, this is the most expensive. It is also by far the worst.

Called the Pepperphoni, it is in fact phoney and not fooling a soul. The offender here is not the pepperoni substitute (made with pea protein). At worst, that was bland but ultimately inoffensive.

The problem is the cheese alternative. It is cardboard-esque, didn’t melt particularly well and when bitten into, the entire layer of plant-based came gunk with it. Unfortunately, this pizza couldn’t be salvaged by the addition of olives, jalapenos or sweetcorn. No bueno.

For me, a walk to Veggie Pret is infuriating in that I walk past up to seven normal Pret A Mangers depending on the route taken. But it’s totally worth it for the array of exciting and wholly underrated plant-based options.

From the hoisin mushroom wrap (a brilliant option) to its VLT – a take on the BLT with seasoned roasted mushrooms making an impressive stand in for bacon with enough bite to hold its own. There’s also a ‘chuna’ baguette, with chickpeas taking the place of tuna. All in all, the breadth of choice is something few others have and must surely be rolled out to normal Pret restaurants soon.

These great guys even came out with a vegan croissant. About time.

Let us know if you have discovered any new and exciting dishes!