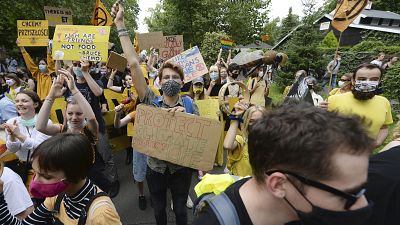 Activists taking part in the Great March for Climate in Warsaw, Poland.   -   Copyright  Czarek Sokolowski/Copyright 2020 The Associated Press. All rights reserved.
The opinions expressed in this article are those of the author and do not represent in any way the editorial position of Euronews.
By Sam Knights  •  Updated: 28/12/2020

Time seems to work differently in the midst of a crisis. Often, the metaphor we defer to is the image of a clock. We are running out of time. We are sounding the alarm. We only have ten years left to save the world.

The climate crisis has upended our understanding of time, and reframed all human activity as a fight against the clock. In the western imaginary, the climate crisis is a bomb that is waiting to go off.

In truth, the situation is much, much worse. The bomb has already detonated. Or, rather, there are millions of bombs and they are detonating all of the time. People are dying now. People are being displaced now. Climate change is not some abstract future threat, but a real and present danger. Yet, all too often, our reaction is to freeze in the face of catastrophe. We go about our daily lives, and we try not to think about it.

Every year is an important year in the fight against climate and ecological breakdown. Throughout 2020, however, it often seemed that the climate movement was nowhere to be seen.

2019 could not have been any more different. Greta Thunberg became a household name. Alexandria Ocasio-Cortez was elected to Congress. Millions of schoolchildren marched through the streets, demanding radical system change. Extinction Rebellion organised one of the largest events of civil disobedience in history and the United Kingdom became the first country in the world to declare a climate emergency.

It felt like change was, finally, beginning to happen.

A period of exhaustion

Then, without warning, everything suddenly stopped. It would be wrong, however, to attribute this entirely to the pandemic. The pandemic only exacerbated a trend that was already beginning to develop. Many activists had completely worn themselves out. In Britain, Extinction Rebellion had descended into infighting and many activists could no longer cope with the stress and the pace of the movement.

Savannah Lovelock stepped back from the environmental movement this year to focus on her own mental health.

Like so many people, she had been fatigued by the previous year and wanted to find ways of protesting that were “rooted in health, energy and love, rather than fear, stress and pressure,” she tells me.

“It's been hard. There is much talk of infiltration from the state into activist spaces, but nobody ever talks seriously about the infiltration of a malicious work culture that is, in my opinion, a foundational part of the system that we are all trying to change.”

When the pandemic hit, everyone was forced to take a break, whether they wanted to or not.

Kay Michael, a climate activist working in the arts industry, reflects on this sudden change in pace. “A lot of my activism suddenly went online,” she explains, “and I had to totally rethink it.”

The COVID-19 crisis took everyone by surprise, and it completely knocked the momentum out of the British climate movement.

Initially, we tried to stay hopeful. Kay Michael tells me that many activists were already well-accustomed to zoom meetings and large conference calls. “We were used to meeting regularly with people we had never actually met before,” she says, “so in some ways, it was just an extension of what we had been doing before.”

In this way, many people tried to continue doing what they had always done. They used the skills they had developed through their activism to support their community and to model a politics of care and of renewal. Climate activists led the way in setting up and running mutual aid groups. The pandemic was an immediate threat and they were using their skills.

The rebirth of protest

But the pandemic was not able to suppress every protest.

This year, the British climate movement was responsible for some of the most brilliant and creative actions in history. In February, hundreds of activists occupied the British Museum with a thirteen-foot wooden horse. In September, a large crowd gathered outside the offices of a rightwing think tank in London, where they listened to speeches by Zadie Smith, Mark Rylance, and George Monbiot.

Later that month, Extinction Rebellion blocked access to three printing presses owned by Rupert Murdoch, preventing the newspapers that were being printed there from being sold.

These rare moments of uprising were important for the movement to keep going.

I was desperate to hit the streets again and feel like I am physically doing something.

Climate justice activist Zoe Rasbash explains, “I was desperate to hit the streets again and feel like I am physically doing something.” This is a sentiment shared by many who understand the importance of the new safety regulations and yet, on a deeply personal level, miss being part of a crowd.

Around Europe, Carola Rackete made headlines this year after she was arrested for docking a migrant rescue ship without authorisation in the port of Lampedusa, Italy.

Now, she reflects on another year that “made connections between people even more difficult.” She recalls one protest in Germany that caught her imagination.

“The Dannenröder Forest was cut down by the German government last week, but the protests against this project produced many seeds.” The story is, ultimately, a hopeful one; that even when we fail, we are laying the groundwork for future success.

“The local citizens who had opposed the project worked alongside autonomous activists - a local Extinction Rebellion group managed the camp site and hundreds of climate justice activists built tree houses.” This was a moment in which the entire climate movement united. A powerful window into a more collaborative world.

'We either have to win or fail trying'

This year, we learnt the importance of working together.

We learnt from one another, and we took time to educate ourselves and to share our knowledge. Everyone I talked to, without fail, mentions the Black Lives Matter movement as a defining part of their year. Farhana Yamin, a climate lawyer and diplomat, tells me that the most successful piece of activism this year was the Black Lives Matter march in London and the tearing down of the Colston statue in Bristol.

“Those protests,” she says, “really showed up the whiteness of the British climate movement. It made the links between race, inequality, colonialism, and climate change so viscerally and so clearly.”

The pandemic has dominated our lives this year and has changed the way in which activists work and organise. But perhaps, when historians look back, it will not be the pandemic that they are interested in. The police murder of George Floyd sparked protests for racial and economic justice all across the world, and has led to lasting and real change in all parts of society.

Those protests really showed up the whiteness of the British climate movement.

There is still a long way to go, but many activists are taking this moment to reassess their own relationship with race and imperialism. In the British climate movement, activists have been coming to terms with their own history of white supremacy and racialised violence.

The challenge, of course, is putting what we have learnt this year into practice. “There is nothing else worth doing right now,” says Professor Julia Steinberger. “We need to learn and do, and learn from doing very fast. In the end, we either have to win or fail trying. The option of not being in this struggle is simply no longer available.”

It has been a strange, tumultuous, and depressing year. But the people I spoke to are not giving up.

“Activism is humans doing what we are meant to do on this earth,” Savannah Lovelock concludes. “Smash a window, remove people from power, speak truth, hurt, and need. And yet, do so with love.”

What is on the climate activist agenda for 2021?