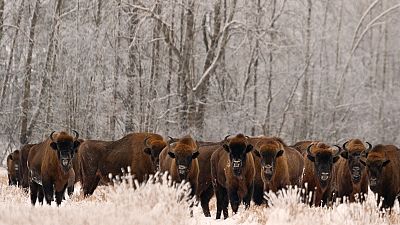 Previously all but gone from the wild, the species has just been moved from ‘Vulnerable’ to ‘Near Threatened’ in the latest update to the International Union for the Conservation of Nature’s (IUCN) Red List of Threatened Species.

One hundred years ago, bison had almost entirely disappeared. Their habitat was lost to logging, wildfires and agriculture with hunting further reducing their numbers. By the early 20th century, only 50 individuals remained and could only be found in sanctuaries or zoos.

However, long term conservation has helped the wild bison to recover.

After being re-released into the wild in the 1950s, the population grew to around 1,800 in 2003. As of last year, 6,200 European bison could be found roaming in areas including Poland, Belarus and Russia.

A small number are now set to be released into woodland in the southeast of the UK by 2022 after being absent from the island for thousands of years. Currently, there are 47 free-ranging herds of the species across Europe, but they are still in need of conservation support.

“Historically, European bison were reintroduced mostly to forest habitats, where they don’t find enough food in winter,” says Dr Rafał Kowalczyk, a member of the IUCN’s SSC Bison Specialist Group. This also means that the small herds they live in are isolated from each other.

“However, when they move out of the forest into agricultural areas, they often find themselves in conflict with people.”

Dr Kowalczyk says conservationists are feeding the bison during the winter for now but adds that it is important protected areas are created for them to graze in future.

Alongside the bison, 25 other species were found to be recovering thanks to the work of charities, scientists and wildlife experts around the world. These successes have been called “living proof” that we can meet ambitious biodiversity targets which help save animals at risk from human activity.

But this latest update to the list of threatened species also categorised 31 as extinct. Of the 128,918 species of plants and animals on IUCN’s Red List, 35,765 are threatened with extinction. All the world’s freshwater dolphin species are now at risk of disappearing forever.

Yet, the growing list of extinct species is a stark reminder that efforts to protect wildlife must “urgently expand,” he concludes.

“To tackle global threats such as unsustainable fisheries, land clearing for agriculture, and invasive species, conservation needs to happen around the world and be incorporated into all sectors of the economy.”