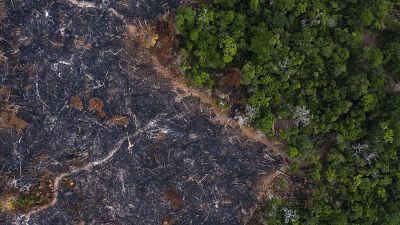 A burned area of the Amazon rainforest is seen in Prainha, Para state, Brazil after widespread fires in 2019.   -   Copyright  Leo Correa/Copyright 2019 The Associated Press. All rights reserved.
By Rosie Frost  •  Updated: 12/11/2020

In a "clamp down" on illegal deforestation, the UK government has introduced a law which will force businesses to check more carefully where their materials are coming from.

Companies will be banned from selling items that use raw materials sourced in a way which breaches local laws to protect forests and other natural environments in the country where they are produced. It has been dubbed a “world first” by Zac Goldsmith, Minister of State for Pacific and the Environment.

As the UK gets ready to host UN climate talks, known as COP26, the country hopes these measures will encourage other nations to do more to protect the rainforest.

At the moment it can be difficult to trace the source of products such as soy, beef, palm and leather. It was recently discovered that a fifth of soy and beef exported from Brazil to the EU came from illegally deforested land.

A consultation by the UK government about the new law received 60,000 responses with 99 per cent of people agreeing that legislation needed to be brought in.

The new law calls for companies to increase transparency and do their “due diligence” by checking whether the items they produce are contributing to the illegal destruction of the environment. But it isn’t yet clear exactly how companies will prove their products are not coming from these places.

Historically this kind of information about supply chains has not been easy to source. There are concerns that the new law could put more pressure on suppliers in poor countries to reduce deforestation rather than the large companies it is actually targeting.

Does the law go far enough?

Around half of all tropical deforestation is thought to be illegal, a fact that has made campaigners question what the UK government plans to do about the legal half.

Making sure that companies aren’t fuelling illegal deforestation is “the very least we should be able to expect” campaigner at Friends of the Earth, Kierra Box told The Independent. She said that the proposed law didn’t take into account that some countries have “weak local laws” on deforestation.

This means that it won’t challenge deforestation that is considered legal in the country where it is happening, regardless of whether the practices are sustainable. When the law was initially proposed back in August, Greenpeace called it “deeply flawed”.

“We’ve all seen the way President Bolsonaro has championed the expansion of agriculture in Brazil at the expense of the Amazon Rainforest,” said Elena Polisano, forests campaigner at Greenpeace UK.

Polisano has called for companies like Tesco to instead cut down on the kinds of items that fuel deforestation in the Amazon and other crucial forests. “They must reduce the amount of meat and dairy they sell and drop forest destroyers from their supply chain immediately.”

As the host of COP26, there is pressure on the UK to show international leadership on essential climate issues like these. The government says that the new law is just one of a number of ways it plans to tackle deforestation in the future.

“In every conceivable way we depend on the natural world around us. Rainforests cool the planet, provide clean air and water, and are a haven for some of the most endangered species on Earth – and so protecting them must be a core priority,” says Goldsmith.

“Our new due diligence law is one piece of a much bigger package of measures that we are putting in place to tackle deforestation.”

What can we learn about air pollution and lockdown from Pakistan?