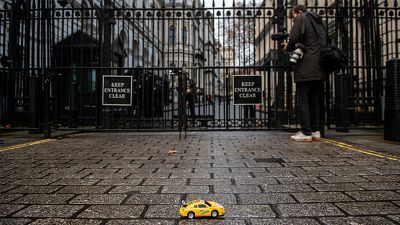 Despite being just 3.5cm tall, the miniature electric cars made quite a statement as they hurtled past the UK Prime Minister’s residence today. Stickers on the toys read ‘fast track to 2030’, while activists practised social distancing and wore face masks.

According to the latest research, 2030 is a key date if the UK wants to keep on top of its environmental pledges. Banning new petrol, diesel and hybrid cars and vans in the next ten years is the only way that the country will be able to reduce emissions enough to meet its legally binding climate commitments.

The race comes after the British government announced in February that selling new, polluting cars would be banned from either 2035 or 2040. Since then, they are reported to be reconsidering an earlier date, but no announcement has yet been made by Boris Johnson. A decision is anticipated in the next two weeks.

Currently, the UK does offer grants for electric vehicles. You can get a discount on the price of a brand new low-emission vehicle, including cars, motorcycles, mopeds, vans and taxis - but the maximum amount you can receive is £3,000. Many believe the government is not going far enough and this is simply not enough of an incentive.

What could this transition do for the economy?

A new report by Cambridge Econometrics found that a UK transition to electric vehicles in 2030 could boost the economy by £4.2 billion (€4.7 billion). This would mean an increase in GDP by 0.2 per cent and the creation of 32,000 jobs.

These jobs are projected to be in sectors such as energy, battery manufacturing, charging infrastructure and service industries such as retail, entertainment and leisure.

“These may be toy cars, but we’re not here for fun and games. They’re carrying a serious reminder - we’re in a race against climate catastrophe that we’re almost certain to lose unless we get polluting petrol, diesel and hybrid vehicles off the road as fast as possible,” Greenpeace UK’s transport campaigner, Paul Morozzo, said in a statement.

Morozzo added that petrol/diesel cars and vans are responsible for around one fifth of all carbon emissions in the UK and describes going fully electric by 2030 as “absolutely essential”.

Welcome to the Australian village powered by the sun