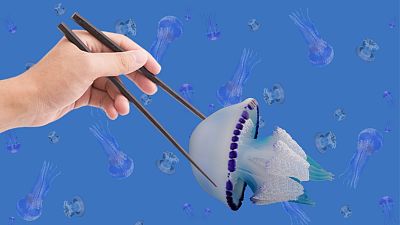 We should be eating more jellyfish if we want to save the planet, says new research.

The research found that 91 globally threatened species of fish are being legally caught on an industrial scale. Around 15 per cent of these species are traded internationally, mainly for consumption across Europe. This includes fish like haddock, Atlantic horse mackerel, and bigeye tuna.

"It should be illegal to eat something that is threatened by extinction, especially species that are critically endangered," says Dr Carissa Klein, who worked on the study.

"We would never consider eating mountain gorillas or elephants, both of which are endangered," adds PhD candidate Leslie Roberson, who co-authored the paper.

If we want to continue eating seafood, industrial harvesting needs to turn to more sustainable sources, according to the Queensland team. Jellyfish have been a staple of some cuisines for over 1,700 years, but aren’t a mainstream protein source worldwide yet.

"With fish, you fish them out and they're all gone, but with jellyfish it is like picking apples from a tree,” explains Gershwin. "They have a life-cycle that the more you take out, the more they are producing, like apples on a tree."

Gershwin describes the species as “renewable”, meaning there is far less concern about overfishing or depleting fish stocks. Jellyfish are also very healthy for a human diet, with next-to-no calories but an ample supply of protein.

In one 75 gram serving, there are only 36 calories - about the same as an iceberg lettuce - but nearly four grams of protein.

The taste is apparently non-existent, instead taking on the flavour of the sauce and seasoning in which the jellyfish is served.

“They’re kind of squishy, kind of crunchy and chewy,” explains Gershwin, “in the mouth it feels like a cross between cucumbers and rubber bands.”

“In the mouth it feels like a cross between cucumbers and rubber bands.”

Roberson adds that there are plenty of other types of commonly enjoyed seafood which don’t have much flavour - it’s just tradition that makes them a delicacy.

"A lot of our tastes for seafood are driven largely by culture and tradition,” she says. “The obvious example is shark fin soup. Shark fins are basically tasteless, and it's all about the seasoning and the sauce - and the status - that makes it a delicacy in China."

Nicknamed ‘jellyball’, cannonball jellyfish are already one of the most valuable exports in the US state of Georgia. Most of the exports from Georgia end up in Japan, China and Thailand.

As we move towards more sustainable food sources, could we soon be seeing more jellyfish sashimi on our plates in Europe?