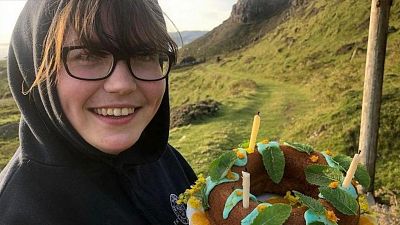 “There’s just not enough time for me to get older and become a scientist.”

It’s been an unusual year for 18-year-old climate activist Blue Sandford. After beginning a permanent school strike in September 2019, aged 16, she was arrested a month later in London and charged with obstruction of the highway as part of Extinction Rebellion’s (XR) fortnight of international action.

Speaking to me from a remote island in the Inner Hebrides, Scotland, Blue explains why she made the controversial decision to leave formal schooling as an activist statement. Critics of school strikers say that young people should remain in education, pursue a career in environmental science, and effect change through more established routes - but Blue isn’t so sure.

“There’s already scientists and politicians talking about climate change, but then they’re not being listened to either,” she says. “The UN has just released a report that by the time I'm in my 40s, five billion people will be experiencing water shortages.

“If me not going to school for a year is going to help prevent that, then I don't think it’s too extreme,” she adds.

The last 18 months have perhaps not been what Blue expected when she initially started her school strike. Most of her peers have barely been in school for the last few months amid the coronavirus pandemic, so as she prepares to take her A Levels next year - entirely through self-teaching - her radical decision now looks pretty sensible.

“In the year that I haven’t been in school,” she explains, “I’ve learned so much more than I would have - like, I’ve written a book.”

Although it’s been an enormous undertaking, this week the teenager became a published author. Challenge Everything: An Extinction Rebellion Youth guide to saving the planet, is Blue’s manifesto on how to save the planet.

Covering everything from starting a petition to ‘five ways to talk to a climate change denier’, the handbook is a convenient guide to the world of climate activism.

From getting arrested to Greta Thunberg

Blue’s book is part of her involvement with XR Youth, a group she has been working with since it was created in early 2018, culminating in her arrest last autumn.

When we speak, her trial is still pending so it’s not possible for Blue to comment further on the situation which eventually led to her criminal charge. She does, however, highlight how unprepared she felt for her experiences with the police.

"It's making it about individuals rather than the movement. It's not about Greta Thunberg, it's about climate change."

“They were really, really awful to me when I didn’t give them my ID,” she explains, “like they kept on saying they were going to strip search me - but also, they didn’t know I was under 18. They asked how old I was, and I said ‘well, what’s the time? Because if it’s after midnight, I’m 17, otherwise I’m 16.

“When I told them that I was under 18, their attitude completely changed.”

Shortly after her arrest, Blue featured in a Times article alongside three other young British changemakers, including Noga Levy-Rapoport, who were all dubbed ‘Britain’s Greta Thunbergs.’

I ask what she thinks about this comparison.

“I don't like it,” Blue replies straight away, “it's making it about individuals rather than the movement. It's not about Greta Thunberg, it's about climate change.”

She explains that by making an individual the poster child of a movement, it also makes the message easier to discredit. “Now, if Greta flies on a plane, everyone will criticise her, and it risks destroying the whole Fridays For Future movement.”

London to the Scottish Hebrides

She grew up between two extremes in the UK, living with no electricity or running water on a remote island in the Inner Hebrides for some of the year and in a bustling district of west London the rest of the time. This gave her an innate understanding and appreciation of both the wilderness and urban spaces.

“I really understand what you need to live here, we’re totally off-grid,” she explains. “I know that if I had to, I could live just completely in the wilderness on my own, and I think a lot of people in places like London think they need things like shops five minutes away, and the internet - but you don’t need it to survive.

“I also feel like I’m much more connected to wilderness and nature than people who I know who have been in London their whole lives, who don’t really have that kind of connection.”

Blue considers the problem with cities in her book, writing that in urban spaces “it’s easy to feel disconnected from nature and [...] to become blinded by consumerism, with ads and shops telling us that we need this or that product.”

Access to rural space isn’t straightforward for lots of people, however. As Tianna Johnson wrote for Euronews Living last month, “the opportunity to live surrounded by nature is a privilege,” so it’s vital to be mindful that the chance to spend part of your year on a Scottish island is not something afforded to many.

I ask Blue how her profound connection with nature can be replicated for people without the opportunities she’s had.

“I think by rewilding cities like London,” she says, “because there aren’t enough green spaces, and there’s so many abandoned car parks and whatever that you can make into parks.

“And there’s also lots of green spaces that aren’t wild. Like perhaps there’s a lawn in the middle of a square, but no one’s allowed to use it, which is such a waste. There’s a bit in my book about guerrilla gardening and making wild spaces in cities.”

An activist from an early age

Though the countryside is a very positive space for Blue, it’s also where she had her first taste of activism aged 8. Her father Roc Sandford, a fellow environmentalist, campaigned against the development of a super-sized salmon farm on the nearby Isle of Mull.

“There was this huge fight between basically my dad and the kind of salmon farming people in the community,” explains Blue. It was a deeply complex conflict, as supporters of the farm argued that the project would bring jobs and infrastructure, and the situation boiled over into threats of violence and slander against her family and other campaigners.

“I'm sort of a bit traumatised by that, I think,” Blue adds thoughtfully.

Despite the challenges she has experienced in environmentalism, her resilience and commitment to the cause is palpable and energising. Blue has experienced the true extremes of dedicating oneself to climate activism but she also clearly understands the need for the movement to be welcoming.

Her book manages to be accessible, without ever patronising her readers, while her passion and dynamism is evident in her writing too. Blue’s voice is a welcome addition to the climate conversation - one we could all learn a lot from.

Challenge Everything: An Extinction Rebellion Youth guide to saving the planet by Blue Sandford is published by Pavilion Books (£7.99).

‘We either have to win or fail trying’: The climate activists of 2020

After bush fires and floods, will Australians vote for climate action?