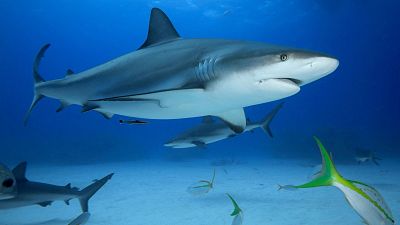 Despite their ‘antisocial’ reputation, Grey reef sharks form social groups with bonds that can last for years, according to new research by scientists in Hawaii.

A team of scientists from universities in the UK and US tracked 41 sharks for four years in the Pacific ocean’s remote Palmyra Atoll. Over a thousand kilometres south of Honolulu, Hawaii, it is home to a diverse population of species including rare sea birds, hawksbill turtles and the grey reef shark.

Cameras attached to the animals also provided a shark's eye view, allowing the scientists to see how many of them were congregating at different times of the day.

With the data they collected, a colour coded “social network” was created, showing a tangled web of shark relationships. Generally, the sharks spent the morning together in large groups, dispersed during the day and reconvened with the same group members later in the day.

“Using one part of the reef helps you find your friends, so to speak,” said Yannis Papastamatiou, Florida International University marine scientist.

“It can be hard to maintain social bonds when you live in the ocean, but if sharks all routinely return to the same spot on the reef then that will help them maintain their group structure.”

Helping each other to find food

The species is considered near threatened by the IUCN as, like many sharks, they are hunted for their fins and meat. Overfishing has also reduced the amount of food available to them and the depletion of coral reefs by human activity is destroying their habitat.

Social groups may help the sharks to share information, including where to find prey. Although the team didn’t record any instances of sharks deliberately assisting each other, hunting together could increase their chances of catching something to eat. If one shark spots prey and begins to chase after it, others nearby will follow, sparking a chain reaction.

It was difficult to prove that these social relationships existed, because sharks don’t follow the social rules that people usually associate with animals. They don’t call to one another, aren’t affectionate and don’t care for their young together. But they do still have ‘friends’ in their own, unique way.

The discovery, however, has left researchers with more questions than it has answered. Papastamatiou says that knowing some sharks live in social groups means major losses to their communities could have devastating consequences for those that remain. Researchers now want to figure out what impact overfishing and loss of habitat has on this watery social network.