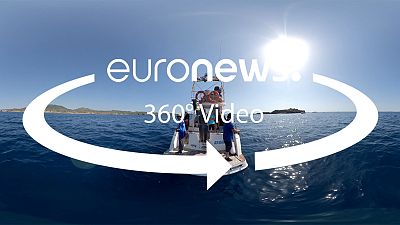 Many of Europe’s coastal regions have suffered severe economic losses as a result of the pandemic. One significant activity that has been affected is the leisure fishing industry. It brings an estimated €10.5bn euros to Europe's coastal economies.

With the lifting of some restrictions in areas such as Catalonia Europe's anglers have been able to go fishing again. But experts are concerned that the pastime may come at a high price to the marine environment?

We spoke to professional and leisure fishermen to assess the extent of the problem.

Around 9 million people in Europe fish for pleasure. Many small communities and poorer regions rely on the popular pastime.

Leisure fishers aren't usually allowed to use professional equipment, but they still impact on fish stocks. In Europe, hobbyists now catch more pollock and as much Atlantic sea bass as commercial vessels. The EU restricts recreational fishing of depleted stocks, such as Eastern Baltic cod or Mediterranean bluefin tuna.

Josep Lloret Romañach is a Marine and fisheries biologist at the Institute of Aquatic Ecology, University of Girona.

He says: "There are fewer and fewer traditional commercial fishermen and more and more recreational ones. So we found, for some species, that amateur fishermen are catching as much as professional ones. These results seem quite shocking!"

Overfishing is a double threat to places relying on coastal tourism; fishermen choosing destinations like Roses in Catalonia pour significant amounts of money into the local economy.

Lloret conducts regular interviews with anglers to get a better understanding of why, how and how much they fish.

It's food - not just fun

For many families, particularly in less economically developed areas such as Roses, they fish for food. Angling is more than just pastime.

Josep explains: "We see so-called subsistence fishing — people who aren't indulging in a hobby, but are getting some fish to feed their family. We don't have much data for these kinds of fishermen, but they are also very interesting.”

Meanwhile, traditional fishermen are increasingly worried about having to share marine space and resources with much less regulated, less controlled and less experienced amateurs.

Away from the coast, more affluent hobbyist can be found scuba diving and spearhunting. These groups have been criticised by environmentalists but supporters are demanding more intelligent regulation instead of outright bans. They argue that, unlike other fishermen, they see the fish they hunt. This means they can select their targets to minimise environmental impact, as long as the regulation is clear.

More in-depth research and better regulation will keep leisure fishing safe for the sea, good for the economy and open to all.

The dumped munitions in our oceans causing serious pollution

Can the blue bio-economy reduce pollution and create growth?

How can Europe’s fishing industry reduce its reliance on plastic?

What is aquaculture and can it prevent overfishing?

The ocean, a source of treatment for some of the world's worst diseases