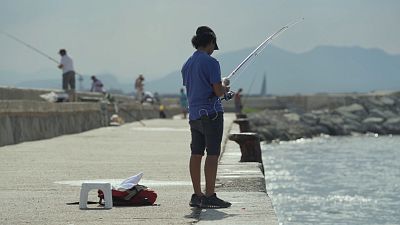 As COVID restrictions are lifted in some places, millions of Europe's anglers are able to go fishing again. It brings billions of euros to coastal economies but critics say unrestricted fishing threatens vulnerable species and interferes with other marine sectors.

Many of Europe’s coastal regions have suffered economically as a result of the pandemic but, with the lifting of some restrictions in areas such as Catalonia, some groups have been able return to their hobby of boat fishing in the rich Mediterranean waters of Cap de Creus.

“What attracts the fisherman is the contact with nature,” says Cinto Berta, the Head of the recreational fishing section in Roses.

“It's the thrill of a fish bite. You never know what you'll catch - what kind of picture you'll post on your Instagram, Facebook or other social networks. And then we often release the fish. There’s no need to keep everything you catch!"

Threats to some species

Around 9 million people in Europe fish for pleasure. Many small communities and poorer regions rely on the popular pastime that brings around €10.5bn euros to Europe's coastal economies. But it may come at a high price to the marine environment?

Leisure fishers aren't usually allowed to use professional equipment, but they still impact on fish stocks. In Europe, hobbyists catch more pollock and as much Atlantic sea bass as commercial vessels. The EU restricts recreational fishing of depleted stocks, such as Eastern Baltic cod or Mediterranean bluefin tuna. But biologists say more research is needed, as threats to vulnerable species with less commercial value are often overlooked.

Josep Lloret Romañach is a Marine and fisheries biologist at the Institute of Aquatic Ecology, University of Girona. He says: "There are fewer and fewer traditional commercial fishermen and more and more recreational ones. So we found, for some species, that amateur fishermen are catching as much as professional ones. These results seem quite shocking!"

Vero Medina is the Roses city councillor responsible for Sports and Youth and says the much-needed income takes many forms but that everyone needs to be cautious.

"The fact of them coming here, renting an apartment, perhaps buying an apartment, having the possibility of renting or owning a boat, renting a mooring, bringing business to the shops that sell fishing equipment. But at the same time we should be careful not to break the ecosystem."

Boat fishing trips cost hundreds of euros and are considered a luxury but shore angling is attracting people of all walks of life. Josep Lloret is a researcher studying recreational fishing in Europe and conducts regular interviews with anglers to get a better understanding of why, how and how much they fish.

One woman proudly tells him: “I come here a lot, and, frankly speaking, I fish much more than most men.”

More than a pastime

In many places, coastal angling does not threaten vulnerable fish species as much as boat fishing. For some though, fishing is about food.

“Yes, yes, yes. I eat them anyway. It’s not just to catch them and throw them away. I eat them,” explains one angler from Toulon in France.

It is common scenario for many families, particularly in less economically developed areas. Angling is more than just pastime.

Josep is a Marine and fisheries biologist at the Institute of Aquatic Ecology, University of Girona and explains: "We see so-called subsistence fishing — people who aren't indulging in a hobby, but are getting some fish to feed their family. We don't have much data for these kinds of fishermen, but they are also very interesting.”

And Josep has a lighthearted view of the future: “Who knows what the future will look like after the COVID crisis, maybe we'll all end up fishing from the pier — including us, biologists!"

As large fishing vessels arrive at the port many people working in the industry ask about the future of professional fishermen. How concerned are they about the growing numbers of hobbyists?

Traditional fishermen are increasingly worried about having to share marine space and resources with much less regulated, less controlled and less experienced amateurs.

Jordi Fulcarà is the president of the local fishermen’s guild. He gives tourists guided tours of the port of Llançà and says control at sea is insufficient. He says there are few patrols - even in marine protected areas - and recreational fishermen often lack basic knowledge or discipline which leads to conflicts.

"There are those who know that we are professionals and respect us, respect our signs and our nets at sea,” Jordi says.

“And then there are those who don't understand anything. They can just drop their anchors on our nets and, with those, we do have conflicts. All we're asking for is a bit more surveillance."

According to marine social scientist Sílvia Gomez, from the Autonomous University of Barcelona, the conflict is rooted in diverging fishing philosophies and the fear of small-scale fishermen to be pushed out of their traditional field by the lucrative amateur sector.

"This is seen as a threat by the traditional fishing community that culturally depends on a type of activity that constitutes its reason for being. In their opinion, they have some rights, acquired by their historical relationship with the marine environment."

Leisure fishers have to coexist with other sea users too such as SCUBA divers. Boris Mörker's family has been running the Poseidon Dive Centre in Roses for more than 40 years. Fishing is restricted at some of their diving spots, but allowed in others. Underwater, the difference can be very clear.

"At the sites where spearfishing is allowed, fish hide the moment they see you,” Boris says.

“Even taking photos is almost impossible. Such sites have fewer species overall. For instance, there aren't any groupers, despite all the rocky habitats where they could thrive."

Spear fishermen are demanding more intelligent regulation instead of outright bans. They argue that, unlike other fishermen, they see the fish they hunt. This means they can select their targets to minimise environmental impact, as long as the regulation is clear.

If professional and recreational sea users find a way to share its resources sustainably, everybody would win, according to Oscar Sagué, a member of the International Forum for Sustainable Underwater Activities (IFSUA).

"It is a matter of dialogue and understanding that the sea is their future — and our future as well.

“Recreational fishing, spearfishing supports a whole industry that depends on selling spearguns, fins and wetsuits. These people have the same rights as everybody else to earn their living at sea. So I believe that with more understanding, with the help of the administration, we can come to an agreement."

More in-depth research and better regulation will keep leisure fishing safe for the sea, good for the economy and open to all.