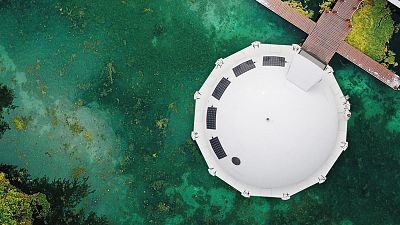 This solar-powered ocean pod is reimagining what tourism could look like in the future.

“This pod is designed to live in harmony with nature, anywhere in the world for a lifetime,” says Anthénea’s website.

Floating on the surface, its creators explain that the pod is anchored to the ocean floor using technology that doesn’t damage the underwater ecosystem or the environment. All of the materials used are recyclable and the interior, which includes a bar and space for 12 people to sleep, is made using sustainable materials.

It was created to encourage a new kind of travel that could overcome the challenges of climate change, and combat overtourism.

The design could become more than just a novel tourist destination, however. Anthénea is 100 per cent powered by the solar panels which cover its dome and all of the wastewater it produces is processed onboard, making it relatively self-sustaining.

As if it weren’t already climate crisis-proof enough, its designers say that it is completely unsinkable and “has been studied to resist cataclysms and the rise of the ocean”.

A love of the sea

The fully autonomous pod was designed by French architect Jean Michel Ducancelle. He has spent his career looking at what the living environments of the future will be and believes they will have to be at the in sync with nature and cause as little damage as possible.

Ducancelle thinks the answer might lie in “a life immersed in the marine and underwater world”. He says that when he was 15 he went to watch The Spy Who Loved Me at the cinema and it sparked his imagination.

Anthénea is inspired by the hideout of the 1977 film’s criminal mastermind, Karl Stromberg. Called ‘Atlantis’, this Bond villain adores the ocean and creates a sprawling structure with everything he needs to survive below the water.

“I was drawn to the story of this man who gives up everything to live under the sea and builds this octopus-shaped space that’s in contact with the flora and fauna of the ocean,” Ducancelle told The Hollywood Reporter.

“It’s a new way to live, a new concept of a habitat that is ecological.”

He hopes that the 360 degree sea views from the pod’s living area will help people to gain an appreciation of the beauty of the ocean. Although hopefully not with the same hatred of human beings that Stromberg has.

Initially, the pod was only meant to be sold to hotels and tourist destinations but now you can order one for yourself. Ducancelle’s design will set you back over €400,000 and if you are thinking of investing to avoid rising sea levels, there is a showroom located off the coast of France.