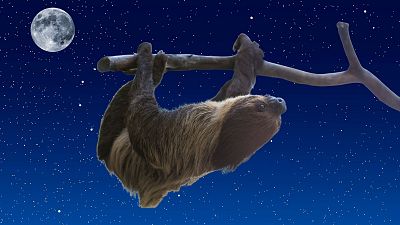 In Northeastern Brazil, sloths who usually come out at night are switching to a daytime schedule due to environmental damage.

This adaption from night to day is happening because deforestation means the sloths don’t need to compete for food or hide from predators.

The slow-moving species lives in the Atlantic Forest where 98 per cent of woodland has been lost and there is no protected land remaining. This forest is a global biodiversity hotspot which used to run over 3000 kilometres up the eastern coast of Brazil. Now it is one of the most endangered rainforests in the country.

Researchers from the University of Notre Dame in the US recorded the behaviour of the brown-throated three-toed sloths 24 hours a day for a month. Giles Duffield, co-author of the study, says that previous research conducted in undisturbed forests had shown the sloth to be nocturnal. However, their study in a highly disturbed area of forest found that they were the most active in the early morning and late afternoon.

Even in disturbed forest, rest was still the sloths’ primary activity.

These roughly cat-sized mammals are found across Mexico, South and Central America. They are famously slow and can spend up to 90 per cent of their day at rest. So slow, in fact, that researchers in Costa Rica have created a conservation robot in their image to hang around for months or years monitoring endangered species without disturbing them.

A range of factors can change whether a sloth comes out at night or during the day including temperature, competition or the threat of being eaten. Even in disturbed forest, rest was still the sloths’ primary activity.

Easier conditions for the slow-moving creature

With so much of the Atlantic forest destroyed, it was impossible to compare the behaviour of sloths in areas with less environmental damage. This, however, led the researchers to conclude that the increase in daytime activity was a response to changes in the sloths’ environment.

“It’s generally rare to observe such flexibility in an organism that allows it to switch from predominantly nocturnal to daytime active,” says Duffield. He explains that nocturnal activity could be a strategy that allows creatures like the sloth to survive in more challenging conditions.

The damage to the Atlantic Forest means there are fewer predators like eagles and large snakes and competition for food from other herbivores is also reduced. This makes the conditions ‘easier’ for the sloth.

“These environmental disturbances are in no way an ideal scenario from a conservation perspective,” says Duffield, “but the results — fewer predators, easier access to primary food sources — clearly had a positive impact based on our observations.”