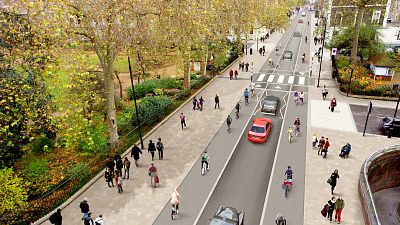 We’ve become used to the quieter roads, fewer cars and open public spaces. It feels like there is more space to breathe.

The ability to cycle without the prospect of elbowing your way through a badly designed cycle lane, or walking down the high street without the fear of being taken out by traffic, has become an unexpected bonus of the current pandemic.

Many will find it difficult to let go of that freedom if things return to normal - a revelation that has sparked a conversation throughout Europe about how we can revolutionise our cities. Backed by growing concerns about the climate crisis, this could see an increasing number of countries adopting an approach that forces cars to take a back seat. In France, Parisian Mayor Anne Hidalgo is already making moves to put an end to the city's terrible traffic problem.

In the UK, the coronavirus crisis has had a measurable impact on how we think urban areas should work. One YouGov poll commissioned by Greenpeace shows that 58 per cent of people now support the introduction of cycle lanes in urban areas as well as increased funding for cycling and walking infrastructure.

A shift to walking, cycling and public transport will be crucial for Europe to meet its long term sustainability goals, says the European Environment Agency. But with decades of urban planning dedicated to making life easy for drivers, big changes must be made if alternative forms of transport are to become the preferable option.

A city looking to reduce pollution

For a group in Oxfordshire, UK, changes like these are something they want to see more of their own county. Oxfordshire Liveable Streets (OLS) is an advocacy organisation looking to improve the lives of the region’s residents by creating the infrastructure to make the local area more accessible to those using active modes of transport like walking and cycling.

In 2016 Oxford was one of the 11 UK towns identified by the World Health Organisation as having dangerous PM10 pollution levels.

“We’re an independent group, but we work with members of the communities we’re trying to innovate,” Lorna King, Co-Director and outreach coordinator for OLS, tells Euronews Living. She has been working with the organisation for over two years conducting outreach projects and encouraging local people to get behind the idea of making significant, sustainable improvements to their neighbourhoods.

“In 2016 Oxford was one of the 11 UK towns identified by the World Health Organisation as having dangerous PM10 pollution levels,” King explains. “That may have changed over the last four years since that survey, but [Oxford] also does continue to breach European annual limits for air pollution.”

They are asking for local government to push cars out of urban areas and back onto roads that are designed to take higher levels of traffic. By stopping city centres from becoming congested and preventing residential streets from being a way to escape the traffic lights on your morning commute, the group aims to pivot away from designs that have favoured the automobile for nearly 100 years. Designs that have also left our cities dangerously polluted.

The model that the group looks to is the Netherlands. “It’s quite evident that they have a very rigorous and thorough cycling infrastructure network across the entire country,” says King. But that wasn’t always the case, she explains, the cycling haven we see today evolved from a particular shift in attitudes in the 1970s.

“There were movements similar to what we’re doing now where people within urban communities came together and said that they didn’t want to have their city centres being dominated by private motor vehicles. They were observing how dangerous that was, not just for health in terms of pollution and inactivity.”

In the 1960s, cities including Amsterdam and Eindhoven saw entire neighbourhoods bulldozed to make them better adapted to suit to the rising number of cars on the road. The country was following the same route as countless others as the popularity of motor vehicles skyrocketed. But eventually, a transformational political decision was made to put money into schemes like bike-friendly paths and nationwide car-free days.

“They started to implement these principles whereby you couldn’t cross a city centre in a car, you had to go around on a ring road,” explains King. “But you could still cross by bike or foot, so that disincentivised driving and it got more people to use active modes of transport.”

This metamorphosis of Dutch cities came about because of record numbers of motoring deaths and in particular the number of children being killed on roads. The Stop de Kindermoord movement brought together activists already working to demotorise cities and communities concerned about such dangers. It created the infrastructure changes that led to the Dutch cities we see today.

Another successful project has been implemented in Walthamstow Forest, north London, but residents weren’t always so keen on the idea of closing some of their busiest roads to motorised traffic.

In 2015, when a central shopping street was pedestrianised with just a single bus route allowed to pass through, protestors crashed the launch of the scheme carrying a coffin. “They were fearful that they were going to just lose all of their business,” King adds. On top of worries about loss of business, there were concerns surrounding emergency service access and the ability to reach their own homes by car.

Anything that promotes fast widespread change, which significantly alters people’s way of life rather than in incremental introductions, can seem all encompassing. “They feel like what they know is disappearing like the ground from underneath them when really it is an improvement that can be built upon.”

None of these services, such as delivery or emergency access, are impeded by plans proposed by groups like OLS. It isn’t necessarily about making everywhere a car-free zone but more often stopping people from using neighbourhoods as cut-throughs to avoid congestion. Access to all houses is maintained, commercial vehicles can be limited to particular times of day and footfall for businesses actually increased in Walthamstow Forest with fewer motor vehicles passing through.

It is getting people to see these material benefits, however, that can pose a problem.

“I think that that occurs with a lot of environmental movements though,” says King. “It’s just difficult to try and get people you’re hoping to improve life for to imagine differently. We really focus at OLS on showing people these models, how they have really improved quality of life.”

Are there enough cyclists to make it worthwhile?

Other objections came from those who believed the positives were targeted at just one subsection of the population, cyclists. Conventional methods of measuring traffic in city centres rarely take into account cycling traffic or even those taking journeys on foot. This means that figures for how many people are actually using active transport to commute, for trips to the shop and other shorter journeys, don’t always represent reality.

For some, this means that efforts to make big changes to cities seem too drastic when the perceived benefits would only be seen by a small group. King says the lack of data poses a problem when trying to convince residents. “I think there are plenty of people already cycling and on top of that when you actually introduce these safer environments for people to cycle in, they are incentivised to choose that option.”

It’s about making it an appealing place that people want to be - a destination not just in the city centres but in the neighbourhoods as well.

What’s more, the obvious environmental and health benefits aren't the only ones on offer here. Car parks, such as in Lyon, France, where these ideas are already starting to be implemented, can be turned into parks. Spaces available for public activities like local festivals or arts events are increased and, perhaps most importantly for families living in the areas, the risk to children playing outside dramatically decreases.

“This is why we call ourselves liveable streets and why we centre liveability,” King says. “It’s not just about going from A to B, getting to and from work and your house. The experience of living in an urban or rural centre is not just about making it convenient for people to get to work.

It’s about making it an appealing place that people want to be, a destination not just in the city centres but in the neighbourhoods as well.”