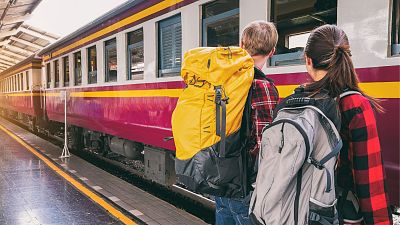 We might not be able to take a break abroad just yet, but reports suggest that once international travel resumes, people will feel more comfortable hopping on the train than flying.

The European Commission already had plans to make 2021 the “European Year of Rail”. As a form of support for the European Green Deal, the move would promote rail travel across the EU with goals to create a network of railways without borders. It is part of a plan to help reach the Commission's aim of achieving climate neutrality by 2050.

With transport making up a quarter of the EU’s greenhouse gas emissions, encouraging more sustainable methods, such as rail travel, is an important part of the changes needed to reach this goal.

“There’s no doubt that railway transport means huge benefits in most areas: sustainability, safety, even speed, once it is organised and engineered according to 21st century principles,” Commissioner for Transport, Adina Vălean said when the proposal was made in March.

A number of restrictions look to remain in place for some time to come, meaning the coronavirus pandemic could give this push for more sustainable travel a boost. Domestic travel is predicted to recover from the pandemic first and for a lot of holidaymakers that could mean travelling by train.

Once international travel is safe, travellers still may not be looking to venture too far afield. Ffestoniog Travel, a company that organises rail tours around the world, found that nearly 85 per cent of its customers were planning a holiday within Europe in 2021. Countries such as France, Germany, Portugal and Switzerland were popular with those polled by the company as destinations for a post-lockdown break.

A sustainable way to travel

Flying produces greenhouse gasses from the burning of fuel. Most of this is CO2 and many estimates put the aviation industry’s share of the world’s carbon emissions at around 2 per cent.

If people choose to travel by train instead for their future holiday plans, this drop in the number of flights could help minimise the impact of tourism on the environment. Figures from the European Environment Agency show that where air travel generates 158 grams of carbon emissions per mile travelled, rail travel accounts for just 14 grams.

Putting these figures in the context of a real journey, Eurostar commissioned independent research comparing the carbon emissions of a journey between London and Paris. Where the flight led to 64.2kg of emissions, the trip by rail created just 4.1kg.

That’s a 90 per cent drop in emissions to travel directly from the centre of one city to the other. And all without the hassle of airport security.

Night trains: overnight rail travel getting back on track in France