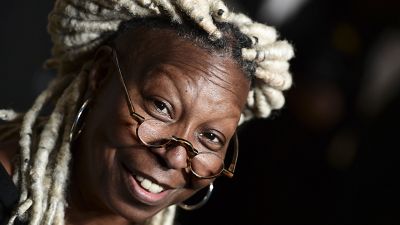 Whoopi Goldberg voices a grandmother reading a story of the history of the world to her grandchild.   -   Copyright  MIGUEL MEDINA/AFP
By Rosie Frost  •  Updated: 04/06/2020

Whoopi Goldberg has lent her voice to an animated film exploring what could happen if we all come together to save the world from the climate crisis.

Set in 2050, the three minute animation is called The Gigantic Change and depicts a grandmother, voiced by Goldberg, reading a story about the history of the planet to her grandchild. Her story starts in 2020 with the world on the brink of collapse due to human activity.

The film purposely leaves the future ambiguous but speculates, from the child’s perspective, how people can start working together to save planet earth.

Goldberg was approached for the film due to her iconic voice, but also because she is known to be outspoken on environmental issues. After approaching her agent, the team behind the film said they “couldn’t believe it” when she agreed to take part.

Co-Director George Lewin said in a Q&A session that the idea for the film came about as a reaction to the deluge of “gloomy future projections”.

“I wanted to give people hope,” he explained, “To show them that a beautiful, sustainable future is in fact possible, where we live in harmony with nature rather than trying to be its master.” For Lewin, the film has a universal message which inspires people of all ages and backgrounds to build a better future.

The director also said that it was important to him to communicate the “bleak reality of inaction, faced by the Grandmother and Granddaughter”.

The film is set in 2050 because this is the year that many countries have set as their target date for reaching net zero carbon emissions. It’s “a year when we’ll know if the action we took was enough,” he said.

“This target is not nearly ambitious enough,” Lewin added,“ and on our current path we won’t even manage it.”

But what does the director think we need to do to take action?

“You’re not going to change the world with recycling or a reusable coffee cup, but these are still worth doing,” he concludes. Lewin’s tips for anyone inspired by the film include adopting a more plant-based diet, cutting down on flying or driving. Equally, he recommends joining a group like Extinction Rebellion or the Sunrise Movement to demand systemic change going forward.