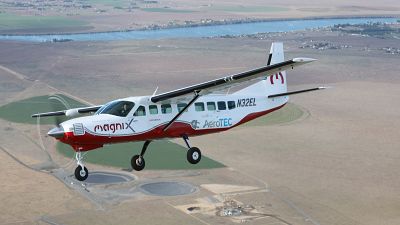 The world’s largest electric aircraft has taken to the skies over Washington, U.S. The plane was in the air for a full 30 minutes and generated zero carbon emissions.

The successful flight on Thursday was captured via livestream and watched by people all over the world. It is being described as a “significant milestone in disrupting the transportation industry and accelerating the electric aviation revolution.”

Developed by propulsion company Magnix, the aircraft has been named the Cessna 208B Grand Caravan and is capable of carrying between 9-14 people. The plane is medium-sized, 41 feet long (12.6 metres) and can cruise up to 214 miles per hour.

“This first flight of the eCaravan is yet another step on the road to operating these middle-mile aircraft at a fraction of the cost, with zero emissions, from and to smaller airports,” said Roei Ganzarski, CEO of MagniX in a public statement.

“These electric commercial aircraft will enable the offering of flying services of people and packages in a way previously not possible.”

The carbon footprint of the aviation industry

Plane engines release carbon dioxide (CO2) and other greenhouse gases into the Earth's atmosphere, which contribute to the acceleration of global warming.

The first issue is that “aviation is essentially a fossil fuel industry, one which guzzles an eye-watering 5m barrels of oil every day,” writes environmental sociologist Roger Tyers in The Conversation. The second problem is ’generation easyJet’, “those who already fly, fly more than ever. This increasing demand from new and existing travellers means the number of passenger aircraft in our skies is set to double by 2035,” Tyers continues.

According to the ICCT (International Council on Clean Transportation), the CO2 emissions from all commercial flights in 2018 totalled 918 million metric tons. That’s the equivalent of over 105,931,225 homes’ energy use for a year.

Many of us fly frequently, both for business and for pleasure, but the aviation sector has started to evolve in recent years as the climate crisis escalates. As the movement gains traction, some resort to “plane shaming”, instead choosing to travel the world by rail and road. Other alternatives include carbon offsetting, a process of paying more for a flight so that a percentage will go to an environmental initiative and thus offset the carbon emissions generated by your journey.

But experts say electric planes are the next big thing. Currently there are about 170 electric aircraft projects underway internationally, a figure which has risen by 50 per cent since April 2018, based on figures by consulting firm Roland Berger. One area that still requires further development is battery capacity, according to BBC Future Planet, so that large fully electric passenger airliners can be developed in years to come.