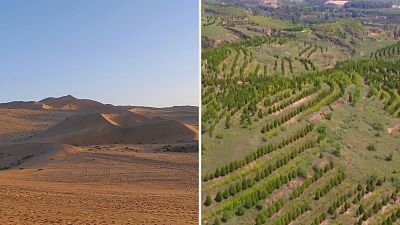 The Maowusu Desert, in northern China's Inner Mongolia Region, was one of four major deserts in the country, until it vanished from the map. Thanks to decades of work, 93.24 per cent of the land has turned green.

In the 1950s the area was entirely barren, made up of nothing more than sand and stones - which ended up being a problem for nearby communities. The city of Yulin, for example, was forced to move further away from the desert three times, after experiencing relentless sandstorms.

This is why local villagers decided to try to repopulate the region with trees, launching a project which has continued for decades. In parallel, the government began ecological restoration work in the area, which is roughly the size of the Netherlands.

The UN is currently trying to combat desertification as part of the 2030 Sustainable Development Agenda. "The latest scientific data shows that the massive effort is painfully overdue. A quarter of our greenhouse emissions come from land degradation", explains UN Deputy Secretary-General Amina Mohammed.

What is the Blue Heart of Europe and why does it need saving?