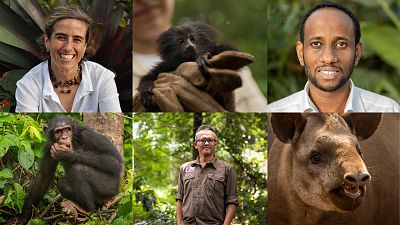 This year's winners of an award supporting wildlife conservation, dubbed the ‘Green Oscars’, have been announced.

The Whitely Award chooses winners who lead grassroots conservation work in countries across the Global South. The organisation behind it, the Whitley Fund for Nature (WFN), provides funding and training for people protecting the biodiversity of the planet in countries where natural wealth is abundant, but resources are poor. Winners have to be nationals of the countries where their work is carried out and projects have to be rooted in science and community involvement.

This year's winners will be added to a global network of 200 conservationists who run projects in local communities in more than 80 different countries. Across the network, the WFN helps to facilitate the exchange and expansion of research that is helping save the swiftly dwindling biodiversity of the planet.

“Tapirs are known as gardeners of the forest due to the important role they play in shaping and maintaining functioning ecosystems,” says Medici. “They are great ambassadors for habitat conservation.”

The Gold Award prize is £60,000 (€68,638) worth of funding that will go towards supporting the Lowland Tapir Conservation Initiative. Among other work, it will allow Medici to continue groundbreaking research into the risk of extinction for this little-known creature and deliver educational programmes to highlight the dangers it faces.

Winners of the Whitley Award

Hirola Antelope are critically endangered and among the top ten species at risk of imminent extinction around the world. Over the last 40 years, numbers have declined by over 95 per cent with fewer than 500 remaining.

Growing up in the region where they are found, Abdullahi Hussein Ali started the Hirola Conservation Programme, which is based near the Kenya-Somalia border, using his understanding of the area. Most local people are nomadic pastoralists and the programme partners with these communities to help preserve the species.

With the £40,000 (€45,629) Whitley Award, Ali plans to introduce a grazing scheme to minimise the spread of disease between livestock and the hirola. The scheme should also help to stop overgrazing, which causes the land to become overgrown with trees. Rangers will be trained to restore already damaged habitat and use monitoring methods to keep track of the species which is rarely seen in the wild.

Gabriela Rezende is the project coordinator for a group protecting Black Lion Tamarins in Sao Paulo’s Atlantic Forest, one of the last global biodiversity hotspots. The small primate’s habitat has become highly fragmented with 80 per cent converted to cattle ranches and sugarcane plantations.

Rezende has been working with communities in the region to connect isolated pockets using forest corridors. Thanks to the work of The Black Lion Tamarin Conservation Programme, the species has been downlisted to ‘endangered’ by the IUCN.

She plans to use WFN funding to engage communities to plant 500 trees in 2020 creating 45,000 hectares of continuous forest. Although safer than they were before, continuous efforts are needed to make sure the species survive in the long-term.

Located in the eastern Himalayas, Lingzhi Park Range in Jigme Dorji National Park, Bhutan is the only protected reserve where you can find two of Asia’s most threatened wildcat species: the Royal Bengal tiger and the Snow Leopard. Other threatened species like red pandas, dhole and alpine musk deer also live in the scenic landscape.

The musk deer, an important species for keeping the ecosystem of the region balanced, is illegally hunted to be used for medicinal purposes. Their scent glands are worth more than gold in Asia. Without patrols like those run by Phuntsho Thinley and the Royal Society for the Protection of Nature, unchecked hunting would decimate the population leading to knock-on effects for other species in the area.

Alongside training for park rangers and local leaders, Thinley also plans to engage residents of the Lingzhi Park Range in education about the importance of conserving the musk deer.

Founder of the Indonesia Hornbill Conservation Society, Yokyok 'Yoki' Hadiprakarsa's work protects the critically endangered helmeted hornbill from the illegal wildlife trade. A sacred species for the Dayaks, the indigenous people of Kalimantan in Borneo, they believe the bird is a guardian of life and will guide them to God.

However, the red protrusion on their beak that gives them their name has long been a highly prized item for collectors which makes them a target for poachers.

A recent surge in trade has increased poaching, leading the helmeted hornbill to be classed as Critically Endangered by the IUCN.

Yoki and his team are hoping to incentivise conservation by making the birds worth more alive than dead. They are looking to develop a sustainable tourism model with local Dayak communities to encourage bird-watching as an alternative to poaching.

While international efforts to look at evolutionary links between chimpanzees in southwestern Nigeria and the Niger Delta have been unsuccessful, Rachel Ashegbofe Ikemeh and her team have found that the population here is a distinct genetic group.

The discovery bolstered the need to protect this group and raise support for their conservation. Their habitat is disappearing at an alarming rate with over 80 per cent of forests lost to illegal farming and logging. Chimpanzees are also targeted for hunting and reserves in the region lack the resources to enforce wildlife laws.

As director of the SW/Niger Detla Forest Project, Ikemeh is combining educational programs with research and policy reform to help local government prevent these important populations from being lost. She will use the funding from the award to establish around 40,000 hectares of conservation land and change laws that protect wildlife in the area.

“The fact that almost half of amphibians are experiencing declines should be a massive wake-up call to humanity that all is not right with our planet – most people however are unaware that amphibians are even in trouble,” explains Jeanne Tarrant, programme leader at The Endangered Wildlife Trust.

The NGO runs the only project in southern Africa focused on the conservation of frogs. Tarrant works to fill gaps in knowledge and address threats including habitat loss, pollution and invasive species.

She is known locally as the ‘frog lady’ for her efforts to raise awareness and change negative attitudes to amphibians. Using the grant from WFN she will focus on eight threatened frog species working with landowners to monitor populations and assess the possibility of conservation interventions.