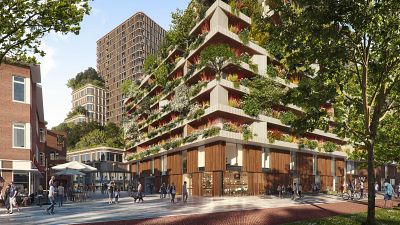 In April 2019, the city of Utrecht in the Netherlands gave its bees a gift. It covered hundreds of bus stops in plants, providing a home for birds and insects otherwise stranded in this urban jungle.

The green roofs are part of a plan by the city council to find eco-friendly solutions for the region. Not only do these islands of foliage provide a home for small animals, they also capture fine particulates of air pollution, help to collect rainwater and keep those waiting to travel cool during the summer. Flowering sedums were the plant of choice for the project in Utrecht. They are the most popular green roof plant because of their very low need for maintenance. Flowering varieties are particularly beneficial to pollinating insects like bees, offering food in an otherwise bleak, concrete landscape.

The city already offers a grant available to residents which cover 50 per cent of the cost towards greening their own roofs. It has recently taken a step further with plans set to be agreed by the council later this year that recommend all rooftop spaces in the region should be planted up.

A leading example for the process of greening Utrecht is a project aiming to build a “vertical forest”. The planned site is nearby the city’s central station and hopes to transform the urban skyline. Around the 90 metre tall tower, 10,000 plants of 30 different species will provide an ecosystem that architects Stefano Boreri and MVSA say is the equivalent to one hectare of forest. Varying sizes of apartments will be nestled among the plants, helping to solve the problem of Utrecht’s growing population, whilst also sticking to their plans for the improvement of biodiversity.

A selection of 360 trees and 9,640 shrubs will be capable of absorbing 5.4 tonnes of CO2 every year at full capacity, the designers claim, and could produce up to 41 tonnes of oxygen. They also hope it will provide protection for birds that live in the cities and connect residents with nature on their own balconies.

“As a form of living architecture, the Wonderwood Vertical Forest has facades which will change both in colour and the denseness of the vegetation,” says Stefano Boeri Architetti, “[the vegetation] will vary according to the seasons as well as depending on the amount of sunlight, growth and maintenance of the plants.”

It is still very much an experiment for the Dutch city, but projects like the Wonderwood Vertical Forest can also act as a kind of “open laboratory” to help figure out what works best for urban biodiversity. A network of sensors will be able to report and control the condition of plants through the Vertical Forest Hub inside the complex, identifying what is working best. Designers say this will provide a venue for documentation and research into further urban forestation worldwide.

Less concrete for a healthier city

Green roofs add what is called “natural capital” to city spaces contributing to the world’s stock of ecosystems. A study in the journal of Global Environmental Change has estimated the value of geology, soil, air, water and living things on the planet at twice the world’s GDP in 2014. This value comes from contributing to the supply chain for fruit and vegetables, opening up spaces for socialising, but also from preventing poor health.

It can be difficult to access green spaces in some city centres as population density grows and essential housing takes the place of parks and gardens. Allowing unconventional access to planted areas is one way that city planners can make sure that even those in the most central locations can experience the benefit of the outdoors.

Being close to plants just makes us feel good, it turns out. Exposure to nature has repeatedly been proven to increase our mental wellbeing meaning the further you live from a green space, the greater the risk of mental health problems.

Whilst the experience of grounding yourself in nature certainly helps, decreased air pollution and noise pollution being muffled by green space could also contribute to residents feeling less stressed, according to a study published in the journal Environmental Research.

Many cities across Europe have started to recognise the value of helping businesses and individuals turn their unused roofs into a space for nature. In central London, for example, there are around 700 green roofs covering an area of 17.5 hectares, recorded and collected together in a crowd-sourced map of the capital. Paris is set to open the world’s largest urban farm in 2020 as part of the 100 hectares the city has committed to covering with vegetation.

Stuttgart, Germany is frequently recognised as the continent’s green roof capital, due to its extensive network of alternative outdoor spaces. The city has been subsidising projects since 1986, in an initiative that led to 60 per cent of its area remaining verdant, according to the WWF.

Part of the motivation for maintaining these interconnected areas of vegetation is to encourage airflow, which lessens the concentration of air pollutants. Sat in the basin of two river valleys, Stuttgart is the centre of the German car industry making it vulnerable to poor air quality and urban heat build-up. In the early 1990s, construction spread to the hills surrounding the city, blocking its sources of fresh air. Using information from its first “climate atlas”, the city started to recognise the importance of keeping these spaces green.

Green roofs play a unique role in the management of the city’s environment. Reflective surfaces cause built-up areas to become urban heat islands, so a cover of foliage dampens this somewhat. Research from the University of Athens, Greece, found that when applied on a city-wide scale, this sustainable solution could reduce temperatures by up to 5 degrees Celsius.

Stuttgart may have been one of the first, but the improvements in city life offered by green roofs have helped the idea to spread. Within Germany, Berlin is now adopting some of the same policies and further afield, Singapore is going a step further by installing greenery on buses themselves. Outlandish experiments aside, the key to making our cities happier, healthier, more sustainable places to live could lie in planting as many of these spaces as possible.

This modular vertical farm could sweep away 'urban food deserts'