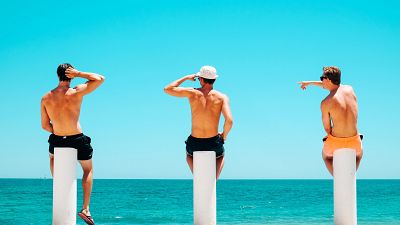 New research reveals that ‘stag/hen do’ trips abroad make up a significant proportion of flights leaving the UK each year. The pre-wedding party tradition might be a bit of fun, but it comes at an environmental cost.

A new campaign launched by green charity Hubbub encourages Brits to switch to UK-based stag and hen dos due to the carbon footprint of flying overseas. The research concludes almost half of all flights taken by men aged 20-45 are for stag dos, while a third of flights account for women’s hen trips.

Of the 2,000 people involved in The Why Wing It campaign, results showed British men went on four stag dos in 2019. On each trip they spent over £420 compared with those who stayed in the UK to celebrate, who spent only £260. As such, there are also financial savings to be made, yet another good incentive not to fly.

According to Hubbub, those surveyed said stag and hen priorities include having all their nearest and dearest attend, getting a good deal, great bars and nightlife. The charity maintain this is all achievable without having to board a plane, recommending swapping Barcelona for Brighton, Benidorm for Manchester and Berlin for Glasgow.

How much would a UK-based stag improve your carbon footprint?

Research by partner firm Carbon Credit Capital reveals that if a group of 10 chose Brighton over Barcelona when travelling from London, they would reduce their carbon emissions by 98%. As an equivalent, this would be the same as one person in the group stopping driving a car for 1.4 years.

Similarly, opting for Manchester over Las Vegas would equate to going vegan for 1.5 years and choosing Edinburgh over Dubai is like giving up driving for a total of 7 months.

After the success of Greta Thunberg’s ‘flygskam’ campaign in Sweden last year, the plane shaming movement has really taken off (excuse the pun). Flight Free UK is one such movement, and is asking 100,000 people to pledge not to fly in 2020.

According to their website, airlines carried 3.7 billion passengers in 2016 and this is set to rise to more than 8 billion by 2035. Simultaneously, climate scientists are warning that we have less than 12 years to make a significant reduction in our emissions in order to avoid catastrophic climate change.

We spoke to Anna Hughes, Director of Flight Free UK, to find out her views on pre-wedding dos dominating the flight market. “We would urge stag and hen groups to explore other options, for example taking the train to European destinations,” she told us.

“Flying is one of the fastest ways to increase your carbon footprint, and at a time when we need to be drastically reducing our emissions, we should be flying far less. Leisure flights can easily be replaced by travel by other means, or by travelling closer to home,” Hughes concluded.