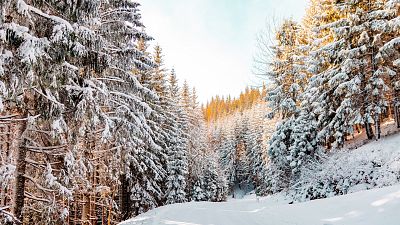 Earlier this month, Norway’s saw its warmest day on record. At a time when temperatures would normally be below freezing, the Western part of the country reported temperatures up to 19C.

Now, the lack of snow has meant Oslo is resorting to using artificial snow, so that children don’t get bored in the winter months. From ice-skating rinks to cross country skiing trails, young people are used to entertaining themselves in icy conditions, so machines are having to do the job instead.

Six snow-blowing machines have been erected in Norway’s Oestmarka forest. Some kindergartens are even investing in snow cannons so that pre-schoolers can continue to build snowmen during playtime.

“It is a really boring winter for the kids if there is no snow: the sand pit is hard,” Ine Kvaleng, manager of Svenstuen kindergarten in Oslo, told Reuters.

Snow cannons reportedly cost around €608 euros a pop, but it’s a price worth paying to “keep winter going,” says Kvaleng. “You can add three weeks on each end of it.”

Local residents are disappointed too. Jogger Marie Sten admitted, “this is the first January in my life I have ever seen without snow. I really hope it is a one-off.”

The decline in snowfall is nothing new in Norway. The country now has half as many snowy days as it had in 1900 and just 50 days of snow deeper than 30cm are expected by 2050. This shift in the weather is directly down to climate change.

The Norwegian Meteorological Institute has said that climate change calls for “adaptation measures” in Norway as temperatures are predicted to rise over the coming years.

“Norway and the world must prepare for more extreme weather. It will become hotter and wetter in the years ahead,” it warns on the website.

“In southern Norway, the increased temperature may lead to an increased risk of summer drought and risk of forest fires. And when precipitation comes, it comes in much larger quantities than before. This can lead to flooded farmland.”

Why is low snowfall a problem in Norway?

Coming top of the league tables in the 2018 Winter Olympics, Norway is a country at the heart of winter sports worldwide.

"At the moment there is no snow whatsoever in Oslo and it is really affecting people. It might be a cliché but, skiing is to Norway what afternoon tea is to the British - snow is in our cultural DNA."

Pleym concluded, "at Greenpeace we want the Norwegian government to address the elephant in the room. We are the seventh largest exporter of CO2 emissions on the planet, so we need to see political action on climate change. Norway needs to start addressing the oil industry as the main cause for the absence of white winters."

Snø is the country’s first indoor centre, having opened this month in Oslo to “complement the winter season,” stated the centre’s CEO, Erik Hammer. Inside, temperatures remain between -2 and -4 C, but some customers still resent having to ski on indoor slopes.

Norway was ranked the third happiest country on earth by the 2019 UN World Happiness Report. So let’s hope the reduced snowfall doesn’t get them down too much.