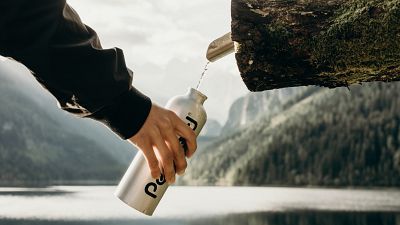 In the UK, any establishment selling food is obligated to provide free tap water. Often, they’ll do so without you asking for it. It’s uncommon to offer tap water in Germany, where you’d have to ask specifically for water from the tap. But that’s not the case in Belgium, where restaurants are allowed to charge for tap water.

Despite that, seven million plastic water bottles are thrown into landﬁll each day in the UK. Meanwhile, millions more plastic items end up in oceans and rivers, damaging the environment and leaving devastating impacts on wildlife for generations to come.

Many in the UK would recoil at the thought of paying to refill their water bottles, when the government often boasts about the quality of the country’s tap water. But Ape2o is challenging the prevailing notion in the UK that unbottled water should be free.

Read more | National Refill Day to spill out across Europe

As suggested by the name, Ape2o is hoping to inspire people to “go ape” and feel galvanised about removing unnecessary plastics from day-to-day use. Its corporate mission is to reduce the amount of single-use plastic water bottles entering the ocean from the city of London.

Cheaper than single-use plastic, but not free

Its network of machines in London have been rolling out since June, offering of ambient or chilled still and sparkling water at a cost of 25p. But these machines aren’t providing bottled water. They’re dispensers to refill a bottle you brought with you.

These aren't your average water fountains, founder Anthony Newman is quick to point out.

“We’re not saying don’t drink tap water, we’ve got some of the best tap water in the world here in the UK,” he says. “But people spend £3bn a year on plastic bottled water – that’s more than four billion litres of the stuff – so it’s not like people aren’t willing to spend money on it.”

Read more | Who are the world's top ten marine polluters?

The company is committed to reducing plastic bottle usage. As a certified B-Corp, it donates 10% of its sales to ocean, beach and river clean-up projects and funding for initiatives educating people on how to avoid single-use plastics. That’s 2.5p from every water bottle it fills up.

At 25p per fill up, it’s significantly cheaper than buying a single bottle of water for on-the-go convenience. A 500ml bottle of Evian might cost in excess of £1 by comparison, depending on where you buy it.

Would you pay to fill up your water bottle?

“You do get some people who say it should be free,” he tells Euronews Living. “So we’ve been out doing some education, and when you explain that this is more than tap water and that their money goes to a good cause, people usually understand and think it’s good value.”

Considering the option of sparkling water and the triple-filtration technology, there is much more to these vending machines than a traditional water fountain.

Even so, shopping and entertainment centre One New Change in the heart of London decided to subsidise the machine on its property to encourage use and help visitors cut back on their plastic footprint. So, although that machine is free at the point of use, the work Ape2o does to give back to the environment still costs.

To complement its four machines in London Zoo, One New Change, Hampton Court station and New Street Square, the brand is soon to launch a range of Silverback steel bottles designed to last a lifetime.

While the carbon footprint of producing a steel bottle is around three times higher than that of a single-use plastic bottle, it means just three to four refills of those steel bottles would offset that footprint.

While the Big Ape H2O vending machines installed by Anthony Newman and Ape2o go some way to reducing the scourge of plastic washed out to sea from the city of London, it will take a culture shift and many, many more machines to prompt a permanent change in people’s mindsets.