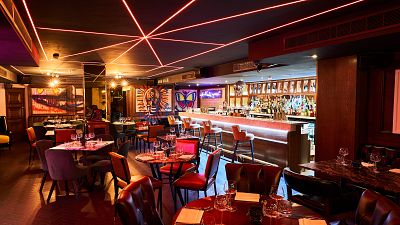 The Wellington Club is one of the oldest members clubs in the UK. Founded in 1832, the club has recently re-established itself in a brand new location just off Piccadilly at 91 Jermyn Street. Through an easily missable white stone door, the bold contemporary interior materialises as you descend into the dining room.

A series of works by Turner Prize-winning artist, Damien Hirst, provide a backdrop for the well-spaced tables. Close enough to create a friendly atmosphere but sufficiently distant that you aren't forced to listen in on your neighbour’s conversation. Above the bar hangs a £2 million disco ball skull and a hand painted graffiti homage to “The Physical Impossibility of Death in the Mind of Someone Living” dominates the back wall.

Read More | Dine inside a re-enactment of the Orient Express

Although the club offers membership, its restaurant is open to all with a menu that showcases seasonal, British ingredients. Created by culinary master Brett Duarte, it is modern European cuisine with the chef’s signature Argentinian influence.

What really shone among the selection of Black Scotch Angus steaks and hand-dived seafood, however, was the wealth of well-considered vegetarian options. The heritage beetroot and Ashmore goats cheese starter blends the natural sweetness of its scrolls of candy-striped beetroot with copious drizzles of truffle honey. Abundant flavours of autumn were unmissable in the delicate Acorn squash ravioli topped with generous shavings of black truffle.

It was refreshing to see inventive and creative options that allowed the seasonal produce to take centre stage. "We consciously develop our vegetarian dishes because there is such a demand now," says Duarte, "we always want to exceed our guest's expectations." As more and more people look to make a reduction in the number of animal products they consume, this seems a well-informed choice for the restaurant as it brings The Wellington's established reputation into the 21st century with a neon-lit bang.

With a similar sense of considered attention, Restaurant Director, Marcelo Santos’s wine recommendations went down well with our chosen dishes. The best pick of the night was a 2017 Languedoc Merlot with dark red fruit flavours that complimented the earthy sweetness of the starter. Marcelo was an incredibly attentive host as he talked us through everything from aperitif options to the winning addition of some unbelievably good triple-cooked chips.

We had a show to get to, the mysterious and interactive House of Kittens’ Amatory Asylum being hosted at the club that you can read more about here, so dessert was a little rushed. Nonetheless, the reimagined tiramisu choux combined all of the best bits of the quintessential Italian dessert in a light, crispy pastry and the chocolate parfait was as rich and sultry as our evening’s entertainment.

The Wellington Restaurant is open to non-members for lunch and dinner Tuesday to Saturday. Reservations are essential for non-members.

More information and a full menu can be found on the club's website.

From Milan to Mayfair: How I built London's most sustainable food hall