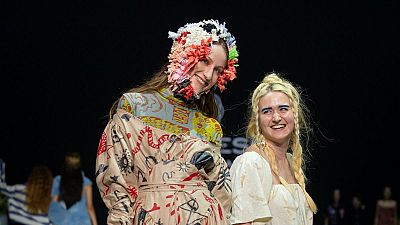 In 2005 Christina Dean was working as a journalist writing about everything from human rights to public health. As she researched and interviewed people trying to find a balanced perspective she gained a “unique insight” into the impact that fashion had on the environment. “I was rather shocked to find that so little was being done to address the problem of sustainability, back then,” she tells Euronews Living, “I felt disappointed at the lack of awareness”.

And so in 2007, she founded Redress, an NGO with the mission to reduce waste and promote circularity in fashion. As promises of circularity have become more appealing as a solution to the environmental crisis, Dean is hoping that designers can lead the way. “The circular economy can feel impossible to achieve,” she says, “our work educates and enables the industry and consumers about achievable points and actions to work towards sustainability”.

After realising that there was a lot to be done in educating designers before they became industry leaders, Redress launched the world’s largest sustainable fashion competition, the Redress Design Awards. “It is estimated that 80% of the environmental impact of a product is laid down at the design stage” Dean explains, “ we’ve witnessed a lack of access to education for emerging designers”.

She hopes that the awards will plug a gap in education created by the rapidly changing nature of fashion. Redress want to see the awards inspire a more knowledgeable, sustainably-minded workforce to lead tomorrow’s fashion industry. “That’s why we see educating designers as an act of environmental activism,” Dean says.

Read More | What is a Circular Economy and how does it work?

Inspiration from the "ashes of humanity"

This year’s winner, Maddie Williams, an Edinburgh College of Art graduate, is a junior designer at Pentland Brands. Her collection “The Mourners”, she says, was inspired by a sense of “eco-grief at the destruction of the natural systems that support us”.

Speaking to us about the collection she says that it was influenced by the wealth of collective human knowledge: “[It is] pieced together from what was saved from the ashes of humanity, referencing mourning dress and death gods from around the world, witches burned at the stake for their knowledge of the natural world, activist groups that fought to prevent the end of civilisation and ancient craft techniques.”

The “memento-mori” was a big influence for Williams, symbolising the rapidly decreasing time we have left to drastically change the way we consume; “This collection is influenced by memento-mori symbolism to emphasise that time is fast running out when it comes to climate change and that we must act now – in the same way that traditional memento-mori remind us that life is short and we must cherish it and focus on what really matters to us”.

Hopes for the future of fashion design

The winning young designer is given the opportunity to create a sustainable collection for retail giving them access to the “real world” of fashion. “It’s extremely important to marry talent with experience so that we can build up the power of the next generation,” Dean says. As well as experience she believes that it also provides budding industry leaders with hope. “There is a huge feeling of frustration, and fear, about the world of fashion that these designers are going into. The Redress Design Award gives them a foghorn to tell the world about the new era for fashion.”

It's about more than looking to an idealistic future though, Dean tells us that the judges are trying to understand every one of the designer's choices from sourcing to life cycle but also the marketability of the collection. “Ultimately the design must also have a purpose,” she says, “the finalists’ entire choices must be defendable”.

This year’s competition saw entries from hundreds of designers across 43 countries with collections inspired both in their aesthetics and their creation by the circular economy. The tricky brief might seem like it would limit the possibility for varied concepts but even the sources for the entrant's fabrics were diverse as their styles. From saris to bed sheets to unwanted work uniforms, each chose a very different waste material to work with. People’s Choice winner, Moriah Ardila from Israel, upcycled faulty tents and sleeping bags into clothing that retained some of the function of the original object.

Sustainability and fashion were a natural pair for the winner, Williams as her awareness of the climate crisis grew with her design knowledge.“I know its cliche,” she admits, “but watching the film ‘The True Cost’ really did move me and open my eyes to the issues facing the industry. After opening those floodgates I tried to educate myself more and incorporate what I was learning into my work.”

At this very early stage in her career, Williams is fully convinced that circular production is the only way forward; “if changes are not made by choice in time, the current model of the industry will collapse under the pressures of the Climate catastrophe. We will not be worrying about growing cotton when we cannot grow food.”