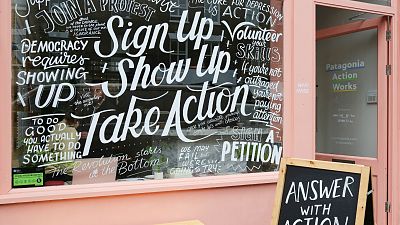 Outdoor clothing company Patagonia is spearheading a movement of grassroots activism, to fight back against climate crisis in sight. In honour of the ‘Action Works’ initiative, a radical café has opened up in East London’s trendiest area, Broadway Market, to connect people who want to take climate action but are not equipped with the tools.

Within this space for environmental activism, like-minded individuals have the option to receive activist training, develop their campaigning skills and read inspirational books to learn how they can make a difference in the face of the climate crisis. All the while, they can purchase a coffee knowing that 100% of the profits are donated to local UK environmental NGOs and charities.

Patagonia’s Action Works online platform has been created to allow users to sign petitions, discover local events, donate money to nearby causes and offer their time and skills for volunteering. The platform initially launched in North America and attracted half a million people in supporting environmental issues; the launch has now become Europe-wide.

The environmental non-profits on the platform are from all over the world and the UK and Irish NGOs include, Extinction Rebellion, Save Our Rivers, Friends of the Earth, 10:10, Irish Seed Savers, Surfers Against Sewage and Rewilding Britain. This platform is another pivotal part in Patagonia’s 45-year history of activism and follows the giving programme ‘1% for the Planet' which was initiated by Patagonia founder Yvon Chouinard and conservationist Craig Mathews.

We spoke to Ryan Gellert the EMEA General Manager for Patagonia who told us, "the urgency of the climate crisis means it’s everyone’s responsibility to act now. Businesses have the money, power and voice to play a major role in saving our home planet - as well as in ensuring that they are not making our environmental problems worse." He continued to explain that the Action Works cafe and online tool allow people to fight for the issues they are passionate about and to implement action in their local communities.

What to expect in the café

As soon as you enter the café there is a range of 24 ‘Action Postcards’ that you can choose from that advise you on how to get involved in climate activism. You can take these cards with you and the different actions you can get involved in depend on the time you can devote to them. These range from advising you on how to ‘Become Carbon Literate’, to ‘Save the Right Whale from extinction’. There are also eight skill cards which offer opportunities to activists to provide skilled volunteering to a range of NGOs in areas such as photography and accountancy.

Books written by leaders and experts are around the café to help you get into the mind of an activist and inspire you to take action. Outside of the walls of the café there are also environmental groups who are there to help you engage in climate action. Sign up to workshops, discussions and free activities to educate yourself on how to tackle the climate crisis. Or simply go along to have a chat about the environment with people who are care about the planet.

How to get involved

We’ve listed the inspiring workshop that you can attend: