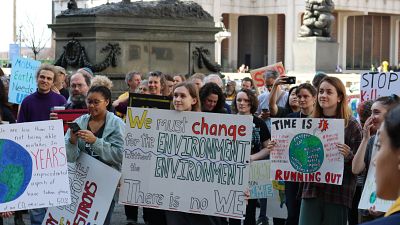 A veritable avalanche of independent shops, tech businesses and conscious companies have made the decision to close their doors to participate in this Friday’s Global Climate Strike.

Thousands of strikes have been organised worldwide, with protesters set to take to the streets of towns and cities across the globe to demand immediate action to thwart climatic crisis.

You may have heard some 1,200 Amazon employees plan to walk out in solidarity with environment protesters, while some Microsoft and Facebook workers are planning the same. But few major companies have made their own commitments for the Climate Strikes on 20th September in most of the world and 27th September in Italy, the Netherlands and Canada.

Quiz | Because climate change trivia is anything but trivial

We tracked down some of those companies that have promised to shut down operations to find out how far they’re willing to go.

Every Patagonia store and office facility across Europe, will close its doors on the days of the strikes to enable all employees to join their local demonstration.

“The climate crisis is a human issue - affecting all of us,” said general manager for Europe, Middle East and Asia at Patagonia.

“We are inspired by the youth activists who have led a global movement, and Patagonia is calling for urgent and decisive action for people and our home planet. As a global business, we will be closing our stores on 20th and 27th September, striking with the youth activists and calling for governments around the world to take action. We invite the business community and all those concerned about the fate of our planet and humankind to answer with action and join us.”

Major bus, truck and lorry provider Scania has promised to shut down operations, including manufacturing, on 20th September. It said it would use the time to better educate its employees on matters related to climate change.

“What kind of stupidity. Would lower production with one of the world's most climate-neutral electricity create a better climate in the world? Produce more instead so there is money to work out climate-smart technology to export,” said user @mayapersson2.

"Quite meaningless as the climate hysteria has now proved to be based on falsarium. There is no climate change, it was a lie," added @LVenereum.

This beauty and bodycare giant is taking drastic action, closing not just its shops but its offices and factories on the day of the first strike. It shared the statement below:

“Young people have recently taken the lead in climate awareness raising, with movements like School Strike For Climate, Fridays For Future and Student Climate Network crying out for those responsible and those in power to deal with the crisis immediately without any more delay and give them back their futures. All this year school children and students worldwide have been striking regularly in the hope that by missing their education for a day adults will sit up and listen. They now call upon all adults to help by joining the strike on the 20th of September. They ask, that in the same way that they have interrupted their education, that we interrupt our 'business as usual' and join them. That we stop, think and pledge to act. That we acknowledge the urgency of this crisis. That we realise that their future needs our attention now, before it is too late.

“There can be no call stronger than our children sincerely asking us to do the right thing. For this reason, Lush will stop our business-as-usual on Sept 20th for the Strike. Our tills will switch off, our shops will shut, our website will go onto a low energy holding page and our factories will come to a standstill. We hear our children and we stand with them.”

This website-hosting site is offering users the option to dedicate their homepages to a digital climate strike on 20th September and replace their usual landing pages with a bright green, full screen overlay. If that’s a bit much for your taste, it is also offering a banner with a similar message.

“Businesses have a key role to play in making a better world, and on Friday 20 September, Shared Earth, along with Ben & Jerry’s, Patagonia, Lush and other concerned retailers, is closing its shops from 9.00 to 1.00 to support a worldwide action to tackle the climate crisis.

“This will lose us a few sales but life is not just about profit! There are more important issues and we at Shared Earth believe we have a responsibility to do everything we can to raise awareness about global warming.”

As another partner organisation, some Oxfam shops will also be closing their doors on Friday… for half an hour.

During that half hour, staff will take to the streets outside their shops to host mini protests and answer questions on climate change.