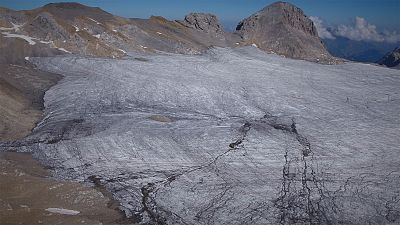 It’s official: the world has just sweated through the second warmest August on record.

Data from the Copernicus Climate Change Service shows temperatures were 1.2 degrees centigrade above the pre-industrial average.

It was drier than usual across the Iberian Peninsula, France, the Benelux countries, northern Germany and Poland.

And while Canada was significantly wetter than normal, in Siberia it was drier than average - as the graphic above illustrates.

That dryness contributed to the ongoing wildfires there, while one of the big stories of August was the wildfires in the Amazon.

Professor Martin Wooster, Professor of Earth Observation Science at King's College London, says there is a clear link between such fires and climate change.

He told Climate Now: "When you cut down and burn forest you're essentially replacing something that stores a lot of carbon per unit area with something like grasslands or croplands that stores far less. And so that is a net release of carbon into the atmosphere in the form of CO2, and CO2 is the main driver of climate change, and so that's how these fires can have an effect on climate change, or at least the major way that they do."

Glaciers are one such indicator. Matthias Huss, a glaciologist at Eth Zürich, has been monitoring the Plaine Morte glacier high above the Swiss ski resort of Crans Montana.

Like all Alpine glaciers, it's getting smaller. This glacier has lost almost 50 metres in height over the past 30 years.

The glaciologists use a simple and reliable ice pole system to measure how the ice is melting.

"This doesn't look extreme,” Huss says, “but actually here we are in an upper part of a glacier, so this is the region that should be snow-covered by now, where the glacier should gain some mass. But in years like this, and actually in all years that we had in the last decade, the glacier lost mass here."

Huss says the reason is simple. It’s just too warm.

"We have enough snow. So, in the last two winters we got extreme amount of snow. In this place we had more than 5 metres of snow in April and May. So we were actually thinking that this should be enough finally to cause some gain of the glacier again. But it was not the case. So the temperatures in summer were so high that everything was melted, and now the ice is melting and the glacier is losing mass."

More than 500 Swiss glaciers have disappeared since 1850. The forecast is that at least two thirds of all Alpine glaciers will be gone by the end of the century.