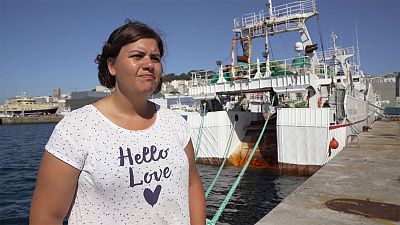 Cultural stereotypes in the fishing industry are part of the reason most women work on land, performing jobs that are considered 'female. Lidia Gonzáles decided to challenge these social perceptions by choosing to become an officer on a large fishing vessel. She spent six months near the Falkland Islands on her last trip.

Lidia says she always liked sailing and fishing, so it wasn't a huge leap for her to join the profession. It is rare for young women to become officers on large vessels and Lidia was aided by the EU-supported REDMAR project run by the Galician non-profit FUNDAMAR foundation,

The foundation helps women obtain the professional training needed to work on board these vessels. FUNDAMAR was able to put Lidia in touch with a commercial fishing company which eventually took her on.

Lidia says she expected a hard time from the all-male crew of 40 men during her Atlantic fishing trip - but she was pleasantly surprised to find her male colleagues professional treated her with respect.

She thinks former stereotypes about traditionally 'male' or 'female' jobs are in many ways obsolete.

"The generational change is starting to influence opinion," she says. "There’s greater understanding of the fact that women must be allowed on board, otherwise the industry will not be able to replace people taking retirement."

Lidia is now training to become a captain and believes women are more than capable of doing difficult jobs which take them away from home for months at a time - although one day she says she'd like to take a break and start a family.