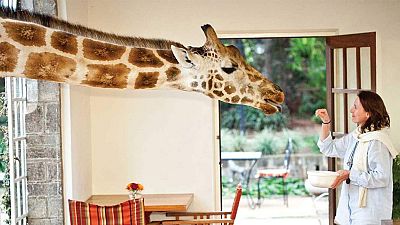 All too many beautiful natural treasures have been ruined by the impact of excessive tourism on fragile ecosystems. Late last year, the famous pristine sands of Maya Bay, Thailand were closed to visitors indefinitely as a plethora of visitors had started to damage the coral reefs, mangroves and beaches in the area.

It's not just marine life, either. Every year there is a slew of stories about visitors getting to close to animals that often end up taking the blame for the influence of human actions.

But it doesn't have to be this way. Many hotels and resorts are actively contributing to conservation efforts to help save the animals that are such a draw for their guests. Take a look at five of our favourite holiday destinations helping their animal neighbours.

Giraffe Manor is a beautiful 1930s boutique hotel set in 12 acres of land surrounded by indigenous forests. Kept true to its original, elegant interior, the hotel looks like something out of a film set with the sense that you might find Meryl Streep or Robert Redford at the next table eating breakfast.

It’s not celebrities you’ll find yourself sharing breakfast with, however, but the manor’s resident heard of Rothschild’s giraffe who often visit in the morning and evening. This subspecies is one of the most endangered distinct populations of the animal with under 2000 estimated to be left in the wild in 2016.

The property is situated at the bottom of land used as a sanctuary by the Africa Fund for Endangered Wildlife for this rare giraffe. Residents of the manor have been saving giraffes since long before its time as a luxury resort. The first baby giraffe was rescued in the 1970s when the then owners, Jock and Betty Leslie-Melville adopted orphaned Daisy.

Via a partnership with the Giraffe Conservation and San Diego Zoo, Giraffe Manor is also offering the opportunity for guests to be a ‘conservationist for a day’ and get involved with the rehabilitation of a reticulated giraffe.

More information about bookings and available experiences can be found on The Safari Collection’s website.

This private resort island just south of the equator is hidden in an archipelago of uninhabited islands that are home to a wealth of marine wildlife. Located in Raja Ampat, Indonesia Misool Eco Resort prides itself on its pristine beaches and coral reefs so it is no wonder that they take conservation seriously.

The resort is surrounded on all sides by a 1200 square kilometre ‘No-Take Zone’, a rare kind of marine protected area that prevents any kind of fishing, hunting or extraction of natural resources. Its owners are dedicated to conservation, placing an emphasis on the responsibility of resort destinations like theirs to ensure that they do more good than harm.

Misool Eco Resort’s buildings were even hand-carved from reclaimed tropical hardwood by local craftspeople. Before the resort opened the site had been a shark finning camp and so education to build respect for the local environment as well as providing an alternative income for those that live that was integral to its founding. Dr Mark Edmann, Vice President of Conservation International’s Asia Pacific Marine programme called the resort “one of only a handful of places in the universe where biodiversity is improving rather than declining”.

If you love marine life and want to spend some time diving without worrying about the impact of your stay, you can find more information about this private island resort here.

Situated in a gloriously unsullied natural habitat, Gaia boutique hotel in Costa Rica is surrounded by the coastal forests of Manual Antonio National Park. As well as this nationally protected land, the hotel has its own reserve land set aside for the conservation of both two-toed and three-toed sloths, various monkey species, iguanas and the increasingly rare Scarlett Macaw.

Preserving this part of Costa Rica’s coastal forests is important to securing the future of these species that live within it. Embracing this natural environment has helped to the hotel to create a unique experience that allows guests to get close to nature without damaging it.

Alongside experiencing the 10 acres of private reserve, the luxury hotel also has a gorgeous eco-friendly spa and a restaurant with panoramic views of the tropical rain forest that surrounds it.

The hotel offers is adults and teens only and has large studio suites to act as your own contained getaway deep in the jungle. If you’d like to get up close with animals in one of the most biodiverse environments on earth you can check out their website here.

Bisate Lodge is nestled in the side of Volcanoes National Park in Rwanda which supports in excess of 70 mammal species. These bamboo forests are an essential habitat for the critically endangered golden monkey. The most notable inhabitants of this precious environment, however, are the mountain gorillas.

Around the Bisate site, a reforestation initiative to try and help these elusive creatures has been taking place since 2016. Volcanic soils are incredibly fertile and paired with the high rainfall here this means that maturation of the forest has been a fast process. As the forest reaches maturity it doesn't just attract mountain gorillas but has also been seen to increase numbers of small mammals and even some small carnivores.

Bisate is incredibly close to the National Park's lodge from where you can depart for a gorilla trek to try and see the forests most famous residents. Alongside animal conservation, Bisate also takes part in a partnership that invests in a community cooperative which provides fresh produce for the retreat.

There are six luxurious villas on the site are constructed using natural materials and inspired by the famous thatched roof of the former Royal Palace in Nyanza. These all have a balcony that features a spectacular view of Mount Bisoke. Many aspects of the interior design are made from sustainable materials using local techniques and cultural craftsmanship.

To get up close and personal with the gorillas by renting your own thatched villa you can find more information about Bisate Lodge here.

This peaceful island haven has 38 stand-alone three to five-bedroom villas and many have their own pool so you can relax in complete privacy. The white-sand beaches and clear turquoise ocean, the resort is built to show off its beautiful natural surroundings as all of the buildings were architect designed to be open to nature.

These surroundings, so essential to the experiences offered by Amanyara, are home to Hawksbill turtles, humpback whales, and hundreds of migratory bird species. The resort is involved in numerous conservation projects including tag and release programs to help track turtle numbers in the area and coral rehabilitation. Guests can even join these tagging trips to get a taste of what being a conservationist means.

Guests can also take tours with Amanyara's on-site naturalist and dive to experience the stunning coral reefs off the resorts endless white-sand beaches. The island on which the resort is located, Providenciales, was rated the best beach destination by Trip Advisor in 2011.

More information about this stunning private resort and the conservation projects it runs can be found here.

Could 3D-printed ivory be the key to saving elephants?

Would you take the train on holiday for extra days off?