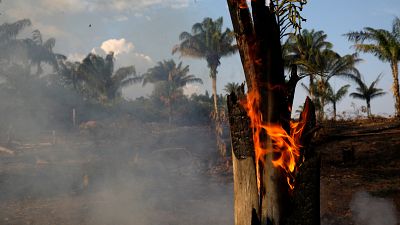 Over the last three weeks, Brazil has seen vast wildfires sweep the Amazon rainforest. In an 83% rise in forest fires since 2018 says the INPE, surrounding states such as Amazonas have now declared an emergency due to the severe environmental destruction. On Monday, the blaze was so extreme that Brazil’s largest city, Sao Paolo, was plunged into darkness at just 2 pm due to smoke, causing a blackout.

President Jair Bolsonaro’s anti-environmental policy is being cited publicly by Greenpeace Brazil’s public policy coordinator, Marcio Astrini, as being directly related to the wildfires. According to the same source, this is owing to the right-wing president's encouragement of more commercial farming and mining in the Amazon, rather than emphasising the need for conservation. Earlier this year, Bolsonaro was accused of dismantling the country’s environmental protections by eight former Brazilian environment ministers.

What are public figures saying on social media?

Social media is becoming a powerful tool in response to this grave crisis, as users and celebrities post photos and messages to spread awareness about the rainforest fires. Hashtags #PrayforAmazonia, #PrayforAmazonas and #AmazonRainforest have been trending, with many referring to the Amazon as the “lungs of our planet” playing a major role in regulating the climate. There has also been widespread criticism about the lack of mainstream media coverage so far, compared with the Notre Dame blaze in Paris earlier this year.

Leonardo DiCaprio posted this on Instagram yesterday, calling the burning “terrifying” and calling out the scarce media coverage in the process.

The model and member of the Kardashian family, Kendall Jenner, posted a series of Instagram stories to raise the alarm.

Supermodel and eco-warrior Gisele Bundchen also shared a Greenpeace petition to “stand with the forest guardians” so that indigenous land and communities can be protected.

Actress Daryl Hannah has been retweeting about the Amazon crisis consistently for the last three weeks since the fires started. Yesterday she simply wrote, “SOS!!”

South-African actress Lesley-Ann Brandt made a reference to the Notre Dame blaze asking “Where are the billionaires?”

Greenpeace shared an infographic of the scale of the blaze, coining two more hashtags : #climatecrisis and #ForestsAreLife.

Politicians are joining the twitter hashtag campaign too with Brexit coordinator for the European parliament, Guy Verhofstadt, sharing his concerns calling for “international action” to be taken.

Greenpeace Brazil expressed its horror at the shocking news, describing the forest fires as "ravaging" the Brazilian Amazon region at an unprecedented rate. A senior campaigner Danicley Aguiar said that deforestation is continuing "unabated" and is "encouraged by the Bolsonaro government". Detailing the dire consequences of tree destruction, Greenpeace explains that it's all a vicious cycle - the more fires that occur, the more greenhouse gas emissions rise, "increasing the occurrence of extreme weather events" such as drought.

Become a Greenpeace Brazil donor and you can help keep our forests standing.

Rainforest Action Network (RAN) is an environmental organisation based in the US, which preserves forests, protects the climate and upholds human rights by challenging corporate power and systemic injustice. Commenting on the tragic deforestation in Brazil, a spokesperson for RAN, Laurel Sutherlin, told Euronews Living that the "most effective and lasting method" to protect the rainforests is to "support the territorial land rights of indigenous people." RAN's Protect an Acre small grants fund offers direct support to the front line communities and the organisation also works with Amazon Watch directly on the ground in Brazil.

What can you do to help? Make a donation to the Protect an Acre programme to make a real difference and help communities suffering devastating loss in Brazil.

WWF describe themselves as "outraged and heartbroken" by what’s happening to the Amazon rainforest, as mass deforestation is only making the climate crisis worse. Speaking out on twitter, the NGO say that the Amazon burning puts the following at risk: "20% of the world's oxygen, 10% of the world's biodiversity and between 17 and 20% of the planet's water."

How can you get involved with the work they do? Demand action and 'join the fight' with WWF by paying a small monthly membership to stop feeling powerless and know your money is going towards fighting deforestation.